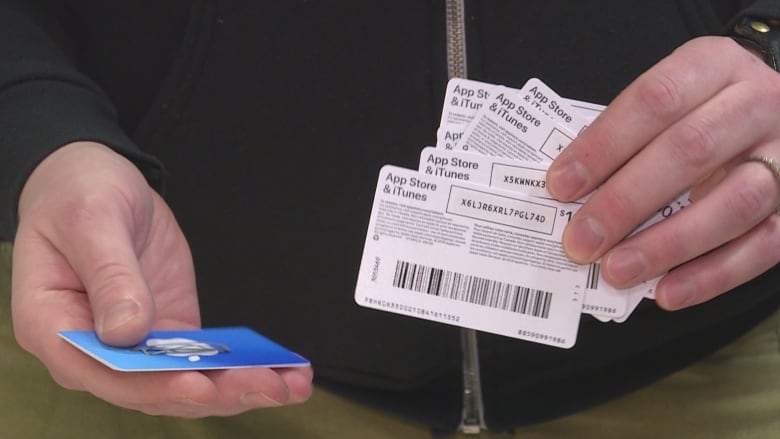 ‘You just want to crawl into a corner and disappear’: How this tech worker was duped by a gift card scam | CBC News

For Dennis Thisner, the misadventure started before dawn, Monday. Most people were just beginning their work day, but Thisner, who works an early shift at a tech company in Vancouver, had already handed $900 over to a fraudster.

Thisner works as a quality assurance engineer — a very technical job, in which the CEO had never directly contacted him with a request. But on Monday, for the first time, he received an email that appeared to be from the boss.

“He’s like, ‘Please text me,'” Thisner said on Tuesday. “I text him and he asks me to go to the grocery store and he’s stepping me through this, asking me to buy gift cards for Apple.”

The text messages are very direct orders — the phone number has an Alberta area code, but Thisner knows his boss travels a lot.

After buying $400 in Apple gift cards, texting images and verification codes, Thisner is asked to buy $500 more in gift cards.

He thought it was all a little odd, but it made sense that the CEO might want the cards for clients, and he didn’t want to disappoint.

“My mentality is that if the boss is asking for something, you do it,” said Thisner.

But pretty much as soon as he left the store, he realized it couldn’t have been a legitimate request.

“That’s when the panic hits,” he said, adding that he began to question the person sending him the texts. He was told not to worry, and to keep the receipts to be reimbursed.

But by the time Thisner returned to the office, he was filled with a profound sense of embarrassment and shame. He took another look at the original email, and while the boss’s full name was correct, the email address was totally different.

“I think that’s the worst part, that you feel someone tricked you,” said Thisner. “It becomes this really weird gut feeling, and you just want to crawl into a corner and disappear.”

It’s a relatively sophisticated scam; the perpetrator took the time to research the targeted victim — Thisner believes they must have used his LinkedIn information. They figured out his unposted work email, his boss’s name, and they created an email account to carry out the scam.

Thisner said his colleagues were extremely supportive when they learned about his misfortune. Two people came up to give him hugs, and the HR department suggested the company could help him out with the loss.

“I thought people would laugh at me, but it’s been the opposite,” he said.

On Monday he was able to get a refund from Apple after a couple hours on the phone, but his credit card company wouldn’t refund $400 for the other cards.

Thisner says there are a few things he would have certainly done differently. He would have looked a little more carefully at the email. He would have asked a few more probing questions early on or tried to get the scammer on the phone to make sure it was, in fact, his boss.

He said if you fall victim to a scam, be vocal.

“Tell people about it, tell police about it,” he said. “It’s always better to spread the word than to feel guilty, ashamed, and hold it inside.”

The advice to make a police report was echoed by Sgt. Aaron Roed with the Vancouver Police Department.

“If anybody does get that tingly feeling that something’s not right, we recommend that you just hang up, contact your local police,” said Roed. “Don’t feel embarrassed if it does happen to you.”

Roed said fraudsters are really good at what they do, and anyone — even a tech savvy person like Thisner — can fall victim.  He said, unfortunately, there isn’t much police can do to track down the perpetrators — they spoof phone numbers and may not even be working in Canada.

Do you have more to add to this story? Email rafferty.baker@cbc.ca