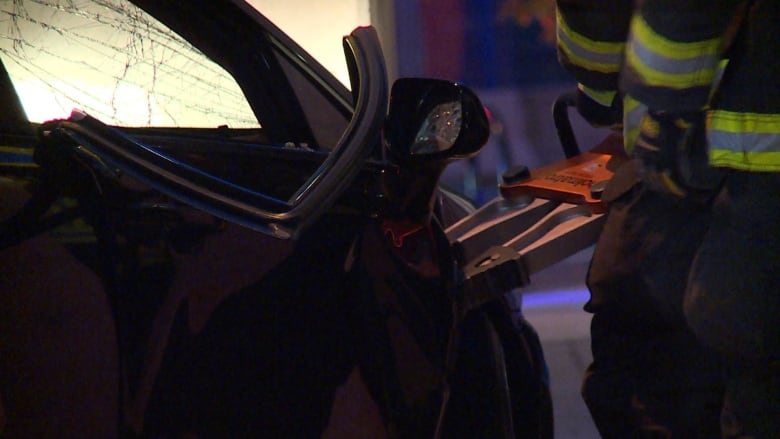 Firefighters are being extra cautious when they work to cut people free from wrecked vehicles these days because of the dangers found in electric cars.

Electric vehicles have high-voltage cables that run through them and a high-powered battery. Piercing either one could cause serious injury or even death, according to Tesla’s emergency first responder guide.

“That’s the major concern. You don’t want to cut through them if they are still energized because it can damage the tools and obviously cause … injuries,” said Daniel Gaudet, president of the Fire Service Association of Nova Scotia.

To get hands-on experience removing people from vehicles, most fire departments in Nova Scotia practise on old vehicles they get from junkyards, but electric cars are so new, few of them have been scrapped.

The sound — or lack thereof — is another wrinkle electric vehicles throw at firefighters, said Kevin Dean, a district chief with Halifax Regional Fire and Emergency, and a member of a vehicle-extrication team for the department.

Why sound is so important

Dean said everyone is used to the sound of an internal combustion engine, so it’s easy to tell when a vehicle is running, while electric cars don’t have any of that noise, so it can be difficult for firefighters to tell if the car is safe to work on.

Crews have to make sure cars are turned off to guarantee they won’t move when they start taking the vehicle apart.

When firefighters first approach any vehicle they put wedges under the tires to prevent them from moving. Teams then move in, turn the vehicle off, put it in park and apply the emergency brake. Once that’s complete, they start the process of freeing people, said Dean.

“It’s not like the old days where you just go out there and didn’t have to worry about anything,” said Gaudet. “Electric vehicles and hybrid vehicles, you have to kind of know what you’re dealing with before you go in and go full bore out on an extrication.”

Electric car manufacturers have stepped up to help first responders by providing schematics and manuals for their vehicles. That includes information on the location of high-voltage lines and the high-powered battery, which are all labelled inside the vehicle.

“Manufacturers have done a great job at identifying the parts of the high-voltage system so that first responders will clearly see [it]. It’s coloured like a bright yellow cable, so we know … we do not touch,” said Dean.

As long as crews act carefully, Dean said he’s not worried about getting shocked while working on an electric car.

The car companies also provide a walk-through of best practices for emergency crews to follow as they take apart an electric car. This information is studied by fire crews to prepare them in case there is a crash.

Neither Dean nor Gaudet know if any fire crews in Nova Scotia have had to remove anyone from a wrecked electric vehicle.

“It’s still pretty rare, but you know everyday there’s more and more electric cars on the road, so we’re expecting to see more … electric vehicles involved in accidents and in fires,” said Dean.