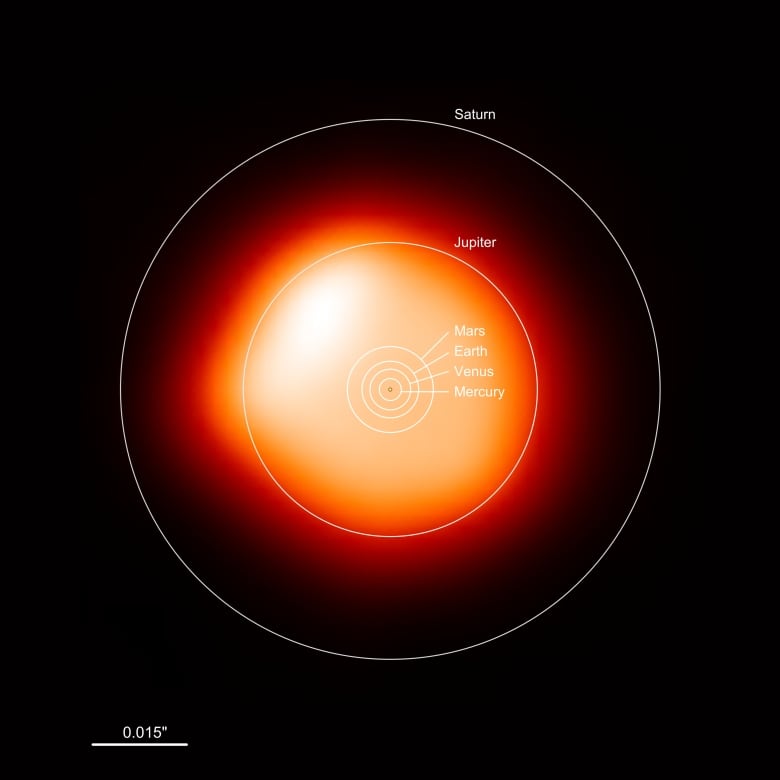 The dramatic dimming of a giant star has astronomers wondering whether it’s getting ready to explode.

Betelgeuse — the red shoulder on the left side in the constellation Orion — has dimmed by a factor of about two since October, a change that has never been documented before.

“We know that it’s the dimmest it’s been observed ever, based on the data we have,” said Stella Kafka, chief executive officer of the American Association of Variable Star Observers.

What makes this development particularly intriguing to astronomers is that the star is slated to explode in spectacular fashion: a supernova. Astronomers estimate this will happen relatively soon — in astronomical terms anyway. It could be today, tomorrow or 100,000 years from now.

And when Betelgeuse goes supernova, astronomers estimate it will be as bright as the full moon and visible even during the day.

The tricky thing is that, because Betelgeuse is a red supergiant cloaked in a cloud of dust and gas, it’s difficult to accurately describe it.

It’s believed to be anywhere between 425 to 650 light years away, with a mass roughly 10 times that of the sun. It is also huge — likely 1,400 times larger than the sun. If it sat where the sun does, it would swallow all the inner planets, including Earth, Mars and even Jupiter. It’s also about 14,000 times more luminous than our comparatively small star.

But Betelgeuse is also a variable star, meaning its brightness rises and falls periodically. But we’ve never seen it like this.

“Maybe 300 years ago, Betelgeuse was dimmer than what we’re observing now, but we don’t have data,” Kafka said.

So, does this dimming portend a potentially historic and magnificent explosion?

It’s not quite clear why exactly Betelgeuse dims periodically, but one of the possibilities is that, like the sun, it has cooler and hotter parts. If one of those cooler parts swung into our line of sight, that could make it seem like the star had dimmed.

In 2018, Betelgeuse had a couple of dips in its brightness, Kafka said. What we’re seeing now could be that same spot, or possibly another.

Plus, dimming isn’t necessarily indicative of an impending explosion.

There’s no telling what will happen next.

“I don’t even know if that’s the dimmest it’s going to get. This is an event that has been evolving,” Kafka said. “We’re still in the middle of it. Well, we’re still actually at the beginning of it. These kinds of massive stars move slowly. They take their sweet time.”

A history of supernovas

Astronomers spot supernovas somewhat regularly, though in other galaxies.

The last one in our galaxy that may have been observed from Earth was Cassiopeia A in 1680.

Astronomers estimate that supernovas occur in galaxies like ours once every 100 years or so, though that doesn’t mean we will witness them all; they could be on the other side of the galaxy, for example, or hidden from view.

A perfect example is a study published in 2008 that detected the remnant of a supernova in the Milky Way that was traced back roughly 140 years. It wasn’t visible to the naked eye, as it lay close to the centre of the galaxy and was obscured by dust and gas.

So we may be due for one soon.

Kafka said there’s no need to panic: even if Betelgeuse were to explode, it wouldn’t obliterate life on Earth or turn us into mutants, though we would notice the blow of radiation it would deliver.

“What I will tell you is that it will be super interesting,” Kafka said.

“It will be an excellent opportunity to study a supernova in the making.”

The star could explode in two ways, she said. Either in two beams from its poles, or with a spherical, symmetrical explosion in all directions. If we were in the way of the beam-type explosion — which we’re not — or if Betelgeuse was a lot closer, we’d be in trouble.

But for now, you can carry on enjoying the holidays, if that’s what you were planning.

“We’re not going to die,” Kafka said. “But if you’re looking for an excuse to eat more this Christmas, go for it.”

Accessibility Inclusion – IT leads to the achievement of the companies 2020