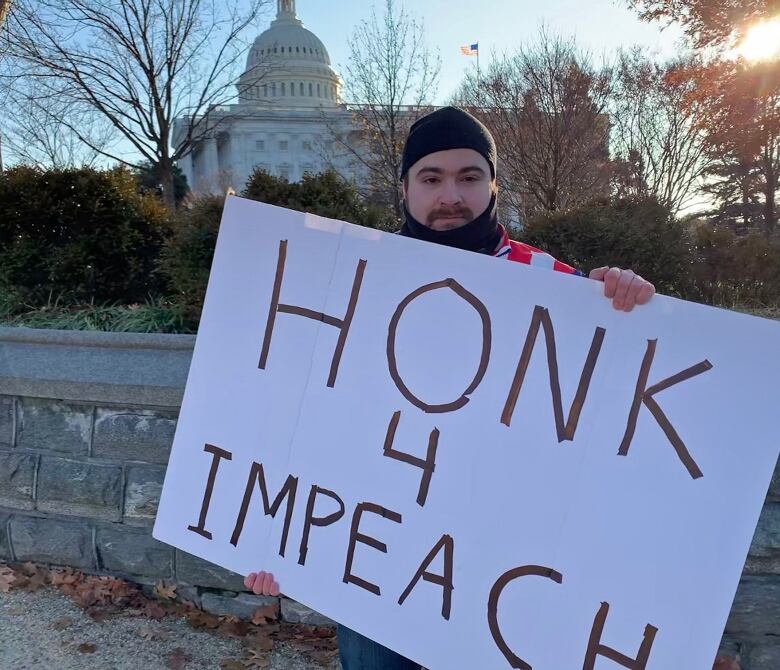 Two factors help explain why Donald Trump felt emboldened to deliver the most strangely celebratory reaction to becoming the third president ever impeached by the U.S. House of Representatives.

Both were on display Wednesday.

Taken together, they reveal why he might feel free to bask in short-term invincibility, knowing that Republicans will not — under any currently imaginable circumstance — vote to oust him from office whenever the impeachment process moves to the Senate, which they control.

He jubilantly read out the news, at a rally Wednesday in Michigan, that his party had stuck with him. Yes, he’d been impeached, but not a single House Republican voted for it.

Watch Trump brush off impeachment at a Michigan rally:

‘By the way, it doesn’t really feel like we’re being impeached,’ Trump said after the House voted to impeach him. 0:32

So unlike Bill Clinton, who, under pressure from his own party, made a contrite public appearance after his 1998 impeachment, Trump reacted with a speech mocking his opponents as “crooked Hillary” and “Pocahontas,” referring to Hillary Clinton and Democratic presidential candidate Elizabeth Warren, respectively.

He also ridiculed the family name of presidential candidate Pete Buttigieg as hard to pronounce, joked that a recently deceased congressman might be suffering in hell and celebrated his firing of former FBI director James Comey.

What a different scene it was 1,000 kilometres away in Washington, D.C.

With a thud of the gavel, House Speaker Nancy Pelosi hailed the impeachment vote as official — then shot a withering stare at members of her party who appeared to begin cheering.

Democrats were determined to cast this as a solemn affair, the reprimand of a president for apparently soliciting foreign dirt against an election opponent and for then obstructing congressional investigations.

Watch the moment Trump gets impeached:

The U.S. House of Representatives has impeached President Donald Trump, marking just the third time the legislative body has voted to recommend removing a sitting president from office. 0:15

But in Trump-era Washington, seemingly not even the most sacred civic ceremony remains entirely solemn.

Not even the impeachment of a president.

In a unique event in U.S. history, Trump now appears poised to become the first president ever to get impeached and then seek re-election as the nominee of a major party.

Andrew Johnson was rejected by the Democrats after his 1868 impeachment, Bill Clinton was halfway through his final term when he was impeached and Richard Nixon quit before being pushed out in 1974.

Stand by Trump — or be cast out

For 2020, Republicans have made it clear that, barring some unforeseen shocker, he’ll be their nominee.

One reason for their fealty is personal. The other invokes principle. And examples of both these reasons resonated in the congressional precinct during Wednesday’s debate.

For a personal example of what happens when members of Trump’s party turn on him, one former Republican voter shared an anecdote while standing on a sidewalk outside the U.S. Capitol building.

Ethan Cusey said he remains a conservative and supports causes like gun rights, but he abandoned his old party after it nominated Trump.

On Wednesday, he took a train into D.C. from his home in Reston, Va., and, for several hours, stood on a corner outside the Capitol holding a sign, “Honk 4 Impeach.”

That political stance has come at a cost.

“I lost a lot of friends,” said Cusey, a 22-year-old studying audio-video engineering.

“Lost a lot of people I used to admire.… The more people rationalized [in support of Trump], the more people gave up what made them respectable people.”

When asked if the experience has been isolating, he noted, cheerfully, that many cars were honking in support as they passed him on Constitution Avenue.

Inside the Capitol, it’s been lonely for other Republicans who oppose Trump; they’ve either been driven out of Congress or, in the case of Justin Amash, out of the Republican Party as pariahs.

Amash now sits as an Independent and his vote was the closest thing to a Republican vote for impeachment in the House of Representatives.

The other development that explained congressional Republicans’ loyalty to Trump unfolded in a courtroom Wednesday.

Trump has delivered on his chief promise to conservatives: to create a more right-wing judiciary, as his administration nominates judges at a dizzying pace.

It just so happened that Republicans celebrated as one Trump-appointed judge played a clinching role Wednesday in a 2-1 decision where a circuit court struck down a key element of Barack Obama’s landmark health law. The court did the administration another favour: it delayed the effect of the decision until after next year’s election, so Trump won’t have to deal with the complex, politically fraught issue of health reform in a campaign year.

Back inside the impeachment vote, Democrats chastised their Republican colleagues for betraying their higher oath to the country.

Pelosi kicked off the 11-hour debate by standing next to a poster with a U.S. flag, inscribed with a line from the Pledge of Allegiance.

She quoted George Washington and Benjamin Franklin, and warned that Trump’s behaviour would threaten America’s ability to hold free and fair elections without the foreign interference so feared by the founding generation.

“Our founders’ vision of the republic is under threat,” Pelosi said.

“Today is a national civics lesson — though a sad one.”

When he entered the chamber several hours later, Adam Schiff, one of the Democrats leading the process, quoted another founder.

Speaking in the dimly lit House, which was four-fifths empty at that moment, Schiff said Trump was the kind of demagogue Alexander Hamilton warned about.

“If what we’re talking about is not impeachable, then nothing is impeachable,” Schiff said. He predicted that Republicans would someday rue their obeisance to Trump.

It’s safe to say they aren’t there yet.

Republicans responded with their own founding-father quotes, citing Hamilton on the danger of a partisan impeachment: “Mob rule,” is how Republican Gregory Murphy described impeachment.

So if the voters are to decide Trump’s fate in next year’s election, what do the polls say?

His approval ratings have budged a point here and there, but remain locked where they were on Sept. 24, the day Democrats announced impeachment proceedings.

Some surveys even show him performing better than usual.

As for impeachment, different polling aggregators reach nearly identical conclusions: that the country is deadlocked, with support and opposition to Trump’s removal from office within a single percentage point of each other.

Support for impeachment may have even dipped a bit.

One possible reason for that, beyond the rock-solid wall of defence around Trump in conservative media, is advertising.

Steven Passwaiter, who heads the political monitoring unit at the media-intelligence group Kantar Media, said 80 per cent of spending on televised impeachment ads is happening in 15 key congressional districts.

And he said Republicans are outspending the Democrats at a margin exceeding 3 to 1.

Republicans are using the occasion to stoke the passions of the president’s 2016 voters in advance of the 2020 vote.

Nearly every Republican who spoke on the House floor described the process as an attempt to steal the votes of 63 million Americans who backed Trump in 2016.

One even called for a moment of silence in the Congress on Wednesday for those 63 million Americans. They likened the impeachment to Christ’s crucifixion.

Trump emphasized that message of group martyrdom at his rally in Michigan.

The president told the crowd, speaking of impeachment, “Anything to get rid of us. Not me,” he said, motioning as if hugging the crowd.

‘Impeachment is permanent,’ regardless of Senate outcome

Pelosi is playing coy about when she might send the impeachment articles to the Senate, saying she wants to know if it plans to conduct an impartial trial. That impartial trial doesn’t sound likely.

But Democrats predict Republicans will pay someday for their behaviour — if not in a Senate trial, and if not in next year’s election, then eventually, and then with their reputation for all of history.

“Our children are watching. No president ever wants to be impeached. Whether Donald Trump leaves in one month, one year, or five years, this impeachment is permanent,” California Democrat Ted Lieu told the House chamber.

“It will follow him around for the rest of his life and history books will record it. And people will know why we impeached. It’s all very simple: No one is above the law.”

After about four hours protesting outside in the cold Wednesday, Cusey left the Capitol.

As he was leaving, news of the Republican win in the Obamacare case landed. Asked whether these kinds of conservative victories made it worth swallowing his pride and re-entering the Republican fold to embrace Trump, he brushed off the idea.

“Mussolini made the trains run on time,” Cusey said. “But Italy would have been much better off without him regardless.”

What’s the point of having a conservative court, he asked, if future presidents can just ignore their obligations under the law.

Republicans brushed off these dire warnings.

Trump said his foes would carry their vote as an eternal mark of shame. He tweeted about 50 times about impeachment Wednesday, Then he flew to a rally — all this despite his office insisting he was too busy working to pay attention to impeachment.

“I don’t know about you but I’m having a great time,” the president told the Michigan crowd.