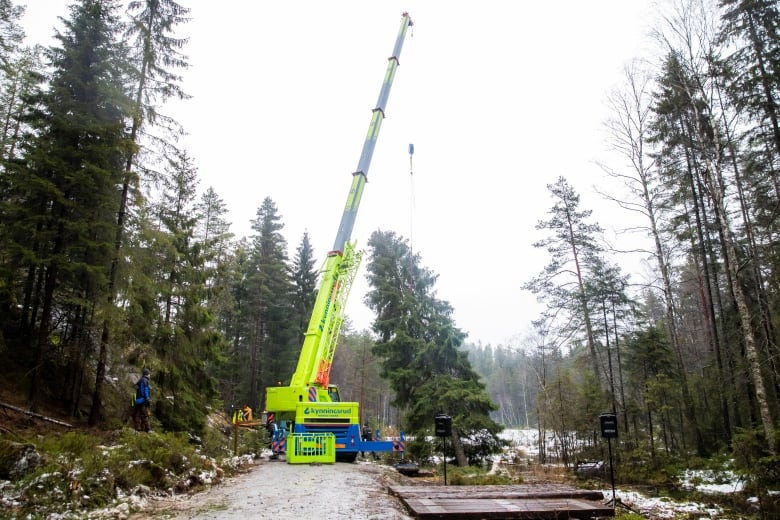 The Christmas tree in London’s Trafalgar Square is a tradition — but the whinging that accompanied this year’s edition might be the start of a new tradition.

The 25-metre-high Norway spruce is getting serious side-eye from some of the thousands of visitors each day who come to see the tree that has been installed every Christmas for more than 70 years.

In the stark daylight, the branches of the tree from the forests around Oslo seem a bit droopy. There are noticeable gaps between them, too.

“It’s just very sparse,” visitor Dennis Lockley said. “It looks like half the needles are missing off it.”

Bryan Hammond joked there must be a hidden anti-Brexit message in this year’s choice of tree. “It must be a bit wild ’cause we’re coming out of the EU then, or something,” he said. “Something must be happening for them to send a tree like that.”

Pensioners Bernadette and Anthony Sunley, of London, have been coming here for decades, ever since their three children were small. “The tree isn’t quite as pretty as it usually is, which is a bit sad,” Bernadette said with an underwhelmed shrug.

The annual gift from Norway can’t seem to get a break, even from Norwegian visitors.

“It’s bad,” said Bjorn Engelberthsen. He came to London for a bit of Christmas shopping and couldn’t resist heading to the square to take some photos of the tree that is making headlines in his home country. “I know a lot of local, nicer trees in Norway than this one.”

The story behind the tree is steeped in history.

In 1947, Norway’s King Haakon VII gifted a Christmas tree to Britain in gratitude for giving him refuge when he fled the Nazi invasion of his country during the Second World War. Every year since, another Norway spruce has graced Trafalgar Square.

Lord Mayor of Westminster Ruth Bush was the dignitary on hand near Oslo when this latest tree was felled. “They welcomed me so warmly,” she said, recalling a particularly touching part of the annual ceremony. “There were two busloads of children, and they sang in English and Norwegian from memory beautifully. It was just so lovely.”

No surprise that Bush is a big fan of the tree. “The tree looks as good, if not better than, the trees that have come previously,” she says. “It’s fine.”

She blames social media for amplifying the criticism of the tree.

If that’s the case, the official Twitter account of the Trafalgar Square tree is clapping back at social media barbs with good humour, noting its familiarity with trolls and refusing to let any pun go unposted.

It’s <a href=”https://twitter.com/hashtag/FolkloreThursday?src=hash&amp;ref_src=twsrc%5Etfw”>#FolkloreThursday</a>! So did yule know, I used to live in a small lake named Trollvann which is Norwegian for “water of the Trolls…”

It’s hard to hate on such a good-natured tree.

Passerby William Smith joined the legion of Trafalgar tree defenders. “It’s great. I think it’s taken a lot of people a lot of time and patience to get it here, and to moan about it, I think that’s silly.”

The critiques tend to quiet when the sun sets over Trafalgar Square and the tree’s hundreds of Christmas lights outshine any bare spots.

“The purpose is to accentuate the calm and quiet and peaceful side of Christmas,” Bush said.

Perhaps it was just the blustery day on Trafalgar Square, but the Norway spruce seemed to nod in agreement.