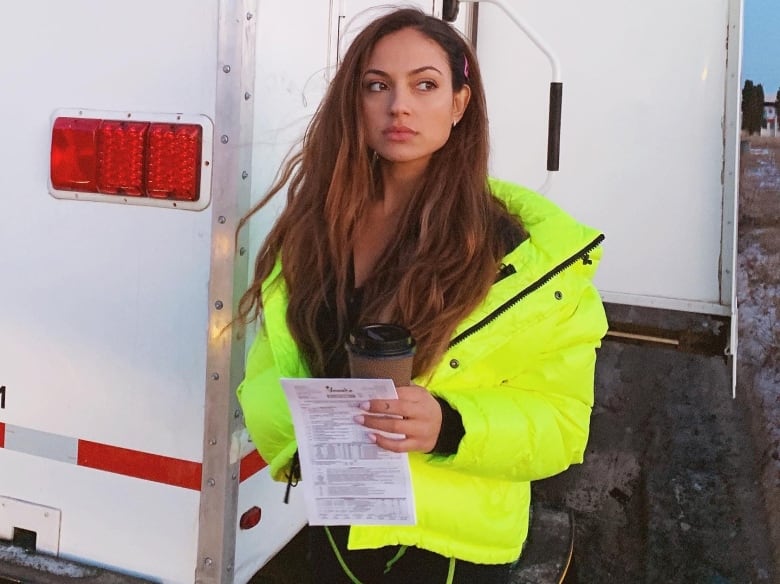 Inanna Sarkis’s trajectory has taken her from goofing around with friends in silly Internet videos to having 10 million followers, a name on dressing room doors, a home under the Los Angeles sun and her name in mainstream movie credits.

It’s also taken her back to her Canadian roots.

The 26-year-old, who was born and raised in Hamilton, has been in Winnipeg since mid-November, filming a horror-thriller called Seance.

Having been living in L.A. for a few years, it took an adjustment to get used to winter once again.

“The weather has been a little chilly but for the most part it’s been a great experience,” she said.

Seance, which will eventually be shopped to international buyers, is about an all-girls boarding school haunted by a vengeful spirit. Sarkis is also in two other movies currently in post-production, as well as one that is soon to be released and a TV movie that has just been completed.

But don’t think she’s outgrown those silly videos with friends. That’s what launched her career and Sarkis is someone loyal to her roots.

“I do have this [social media] platform and I want to use it to inspire and influence people,” she said, adding her primary audience ranges in age from 18-24.

She graduated from Ryerson University in Toronto with a major in criminal justice but Sarkis said her passion was always performing. So she packed up and chased that dream to L.A.

She got into an acting school and was taking classes when she was introduced to someone considered a star on the now-defunct Vine app, which allowed users to share six-second-long, looping video clips.

Sarkis had never heard of Vine and had no social media presence at all but was intrigued. She starred in one of the person’s Vine comedy sketches and then decided to start making her own.

That led to launching a YouTube channel that she hoped would give her some exposure that she could use to leverage her acting career. She created short films and better quality content than Vine would allow.

She realized that when she started to get recognized on the street, and not just in the United States but overseas in Europe.

“It was just a weird, crazy feeling,” she said. “I wasn’t even in any movies then, I was just creating these fun videos with my friends. But people were noticing the content I was creating.”

It wasn’t instant, though. At first, she wasn’t making any income as she worked to built up her platform.

Sarkis said she would write, direct, produce, edit and post up to six YouTube videos per day. At the same time, she was bartending and working other jobs to pay bills.

She can’t recall when her first brand deal came through, but as Sarkis’ YouTube subscription list grew the companies came calling.

She became an influencer — someone with access to a large audience and viewed by brands as being able to persuade others. Brands offer products, vacations, and other opportunities in exchange for some exposure.

What was once “a fun thing I did on the side with friends” became a solid income source.

“I don’t want to put a number on it but it’s like any other job, if you put in the effort and the time and energy it starts becoming lucrative,” Sarkis said.

“It was my main source of income for some time. It helped me survive living in L.A. and having my own place and I went there with nothing, really, so I can tell you that much.”

She is now putting more work into transitioning into full-time acting and those paycheques are the primary income. But Sarkis doesn’t plan on cutting ties with the platforms that helped mold her.

She still writes, produces, directs and acts in her own videos, as well as casts others for parts, but now she has a crew that helps edit and do other production work.

These days she’s only publishing one or two videos a month on YouTube but posts short Instagram videos multiple times a day. Most recently, Winnipeg and its snowy scenes have made an appearance.

Sarkis has longer-term goals for fame but none involve straying too far from the content-creator blueprint.

She wants to produce her own TV series — “There’s a bunch of things that I’ve written over the years” — and write a book, then movie script, that delves into the story behind her namesake.

Sarkis, who comes from middle-eastern DNA — an Assyrian father and Bulgarian mother — is named after the Sumerian goddess of beauty and love.

Sarkis says that middle-eastern heritage is not as well known as the stories of Greek mythology and wants to change that.

In the short term, however, she is heading back to L.A. on the weekend as filming on Seance wraps in the city.

Despite the cold, she is taking warm memories of Winnipeg back to California.

“It just made me feel like home, everyone’s been super nice.”