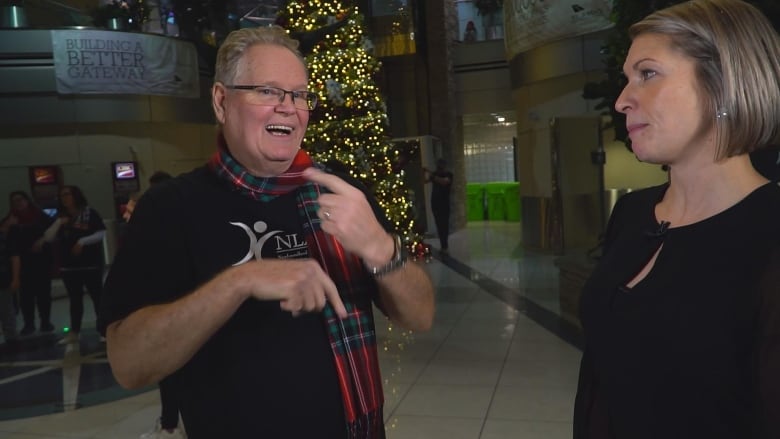 The holidays are busy days at the St. John’s International Airport. But on a recent afternoon, travellers stopped in their tracks to take in a truly unexpected sight.

A choir, performing without words, singing with their hands.

The Deaf Choir was gathered in front of the massive airport Christmas tree.

A dozen members, young and old, stood in the familiar semi-circle of choirs everywhere. The twinkling melody of I’ll Be Home For Christmas filled the air. But instead of belting the familiar refrain, the choir raised their arms, stretched out their fingers, and signed the lyrics in unison.

Their actions swelled with emotion, their hands becoming musical instruments. In the language of deaf people everywhere, they sing.

Murphy is a member of the choir, and executive director of the Newfoundland and Labrador Association of the Deaf.

“It means that, you know, we were here. We are part of the public.”

“I’m full of Christmas spirit here today,” said choir member Linda Healey, through an interpreter. “I’m really happy that people are getting the awareness out here, and we are showing that deaf people can do anything when it comes to performing.”

A first of its kind

Weeks earlier, the choir squeezed into a small classroom at the association’s offices in St. John’s. It was rehearsal night.

At the whiteboard, choir director Leighanne Ryan and choir member Paula Coggins worked on translating English lyrics into American Sign Language. It’s not as simple as translating English into French, or some other spoken language. The signs need to evoke the meaning of the lyrics as much as the actual words.

But that’s just the first challenge.

As the choir practiced, the members watched each other constantly, trying to keep their actions in sync without being able to hear the music they’re signing along to.

And it’s not enough to merely make the signs. Coggins said singing in sign language is very different from regular conversation. As different as singing and speaking with your voice.

“It is really different actually,” said Coggins through an interpreter. “In singing, you have so much more expressions of actions and movement involved, to get the point across.”

The choir members have to slow down or speed up the actions to fit the phrasing. They have to put emotion and emphasis into the performance. They have to do everything a regular singer does, plus so much more.

Choir director Leighanne Ryan has never experienced anything quite like it. But then, neither has anyone else.

The deaf choir came together for what was supposed to be a one-time performance. In September, the Association of the Deaf produced a video for Deaf Awareness Month. A key scene features a flash mob of deaf people, coming together at The Rooms and performing in sign language.

The flash mobbers practiced hard, shot the video, and it was a big hit. Everyone was happy.

But then a funny thing happened.

The phone started ringing at the association’s office. People were asking if they did gigs.

The next month, the group was together again, this time on stage at Mount Pearl Senior High. They started to realize that they had something bigger than a flash mob on their hands.

“It just became something that was so much larger than we started off with,” said Ryan. “And we can’t stop now.”

It’s not just about the music. For the choir members, it’s about each other.

Eleven-year-old Alexandria Garreffa has cochlear implants to help her hear, but she still uses sign language, and feels like she’s part of the deaf community.

“It feels different because I get to learn a lot more sign language than I used to do when I was younger,” she said. “And it’s nice being a part of a lot of other people who know how to sign and I feel more comfortable along with them.”

On a chilly December afternoon, the choir gathered at the airport for its latest job — shooting a Christmas video with the group Play Piano NL.

The piano students moved their fingers across the keys, bringing forth the timeless melody. The choir members raised their hands together, and turned the classic carol into something entirely new.

All around, busy travellers take pause. They put their hustle and bustle of the season on hold, while they take in a moment of holiday magic.

Even if you don’t know sign language, you can still hear the choir.

“Music is the universal language,” said Ryan. “You can sing, or you can play the trombone. Ultimately, you want to be a musician. And what we’ve created here are musicians.”

For Paula Coggins, making music with other deaf people has become a way to give the entire deaf community a bigger voice.

“I think it’s absolutely fabulous,” Coggins said through an interpreter. “It feels wonderful, it’s very inspirational to show who we are, and that we are the deaf community here in Newfoundland and Labrador.”