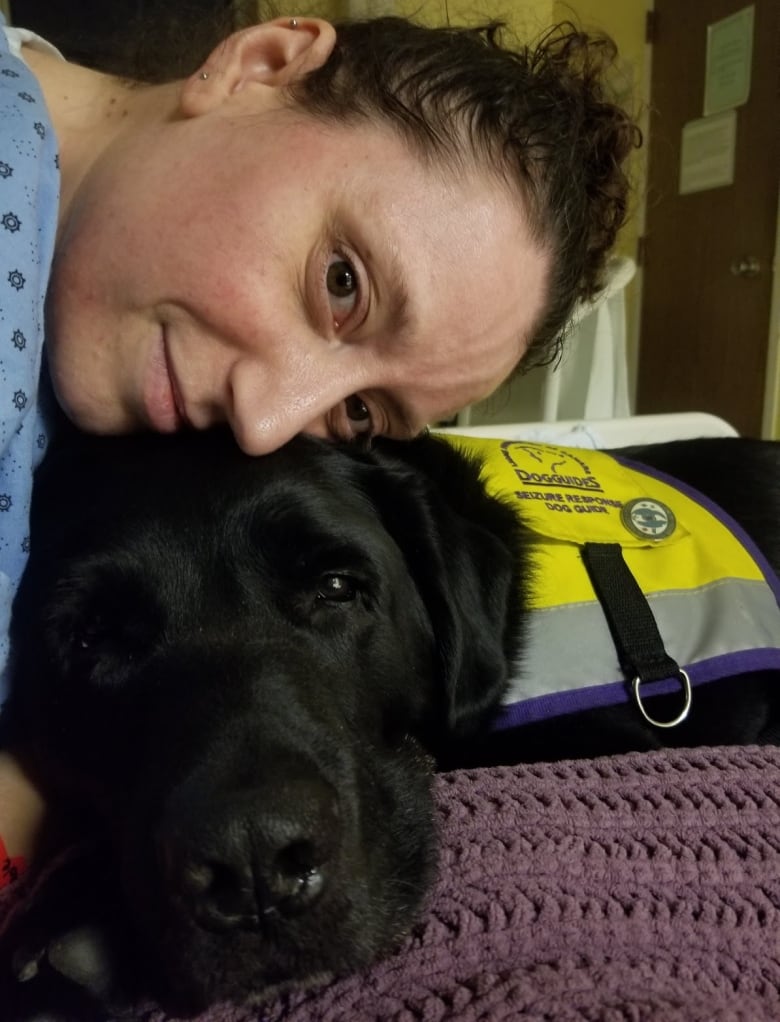 Cindy Martel depends on her black labrador, Jimmy, every day.

The nine-year-old service dog has the ability to sense when Martel, who has epilepsy, is about to have a seizure.

The pup barks before each seizure, giving her enough notice to find somewhere safe to lie down and rest her head.

“If I’m having a seizure, he’s going to keep barking until someone else notices and can help me.”

“We have a special connection,” she said. “It’s hard to explain, but we’re just like one.”

Jimmy is with Martel 24 hours a day, since she could have a seizure anytime.

But she says the cost of owning a service dog is too high — a sentiment that’s echoed in a petition that was submitted to the National Assembly, asking the government to provide funding for people with epilepsy, hearing impairments and autism who require service animals.

Martel was diagnosed with epilepsy at 15. Since then, her seizures have come without any warnings or signs.

After dozens of injuries and trips to the ER for concussions, she was forced to wear a helmet everywhere she went to protect her head.

She recalled a time when a seizure had left her lying outside in the snow in December.

“No one had come to help me,” she described. Her husband realized she was missing after 30 minutes.

This incident pushed Martel and her family to look for help. She reached out to the Lions Foundation Canada, a company that pairs people with disabilities with trained service dogs. That’s where she found Jimmy.

Martel says her dog has given her her freedom back.

The pup, who follows her everywhere she goes, has given her the security she needed to live a more normal life.

Too high a cost

Martel says her epilepsy has left her unable to work, making it difficult to make ends meet.

With other life expenses such as electricity, rent and food, Martel says it’s difficult to cover the cost of a service dog.

She explained that, on average, she pays roughly $60 for dog food, along with mandatory veterinarian checkups and vaccines.

Martel acknowledges that the province’s current program — which reimburses fees associated with service dogs for people who are visually impaired and have motor control issues — is only a small amount. She says it can still help make a difference for people like her.

That’s why Nancy Lévesque, a Rivière-des-Prairies woman who has a hearing impairment, launched a petition calling on the provincial government to include epilepsy, hearing impairments, autism and other conditions to the yearly allowance program.

Like Martel, Lévesque says she cannot work because of her condition, and hopes the government will step in to help with payments for her service dog, Ohana.

Quebec’s Health Ministry says it would need to see more evidence to demonstrate the value of expanding the program before doing so.

In the meantime, Martel hopes others who are in her situation don’t lose hope.