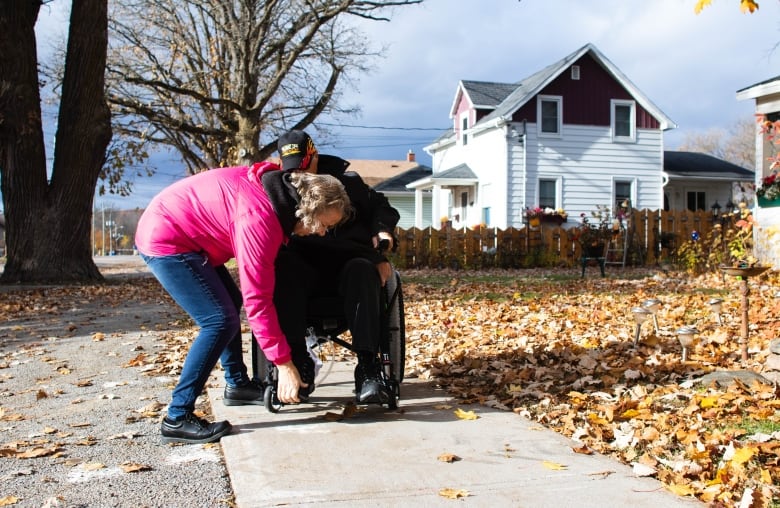 On weekends, Ken Rekowski gets a ride down Highway 138 to his mom’s farmhouse, for barbecues in the summer and TV and games in the winter.

By the evening, though, he’s back in his bed at the Renfrew Victoria Hospital.

That’s where Rekowski has spent most of his days and nights since January 2009, when a car crash left the former security guard severely disabled.

Rekowski is now among the dozens, potentially hundreds of patients in Ontario with traumatic brain injuries who can’t find a spot in a residential facility specifically designed to handle the complex nature of their care.

“When they added his name to the waitlist, they told us that it would be a lifetime [wait],” said his twin sister Kareen, who visits regularly and helps pay for a personal support worker to keep her brother active.

“They said there’s far too few beds, and far too many people on the waitlist ahead of him.”

Even if the 48-year-old were to eventually secure a bed, there’s another problem. Unless things change, it would be far from the small town where he was raised — an urban-rural divide in Ontario’s health care system that brain injury advocates say needs to be addressed.

On the night of the crash, Rekowski was on his way to work just outside Renfrew. Road conditions were poor, and he lost control or his car.

Initially, doctors thought Rekowski’s injuries were so severe that he wouldn’t survive. The family, his sister says, was told to begin planning a funeral.

While Rekowski did pull through, the crash left him with severe physical and cognitive impairments. He has problems forming new memories, is often confused about what year it is or how long he’s been in the hospital, and suffers from a “right-side deficit” that leaves him with limited mobility in his right leg and virtually none in his right arm.

He also requires a wheelchair to get around. And while he has difficulties forming words, he was able to talk to a CBC reporter about his personal interests, like his lifelong love of motorcycles.

On the surface, Rekowski’s case bears similarities to that of Shawn Hill, an Ottawa man who was facing a lengthy wait for proper care after he fractured his skull in the summer of 2018.

Not long after Hill’s family told CBC News about his situation, he was given a spot at a long-term care home. And while both families are still hoping beds open up in residential facilities tailored to people with brain injuries, Rekowski is spending his days in the hospital.

Ken Rekowski’s twin sister Kareen describes what it was like to hear that there was no room for her brother in a residential care facility. Rekowski has been living at the Renfrew Victoria Hospital since January 2009. 0:44

‘The need is great’

Another difference: were Rekowski to get a bed, he’d be about 100 kilometres away from both his family and the familiar streets of Renfrew. The two closest specialized facilities, after all, are in Ottawa.

“We know that the need is great in rural communities,” said Ruth Wilcock, executive director of the Ontario Brain Injury Association.

Brain injury patients often get excellent initial care at major urban hospitals, said Wilcock, but when they return home it can be a struggle to keep that up.

If they go back to the community and they don’t have those same supports, then many of those gains that have been made start to turn into losses.– Ruth Wilcock, Ontario Brain Injury Association

It’s also difficult, she added, to uproot and move elsewhere for care, whether that’s because of job situations — Rekowski’s sister runs an accounting firm in the Renfrew area — or the simple emotional connections and support networks in one’s hometown.

“We sort of patch [brain injury patients] up and we do some rehab with them, and then we send them to their communities, where there just really isn’t that support,” said Wilcock.

“If they go back to the community and they don’t have those same supports, then many of those gains that have been made start to turn into losses.”

‘Escape from the hospital’

According to a David Jensen, a spokesperson with Ontario’s health ministry, the province is spending $86.5 milllion in 2019 and 2020 on services intended for patients with acquired brain injuries — some of which will go to “remote or under-serviced areas.”

The province also offers incentives to physicians willing to set up practices in smaller communities, opportunities for medical students to practise in rural settings, and reimbursements to employers in “underserviced” areas that are looking to hire nurses, Jensen said.

As for Ken Rekowski, he did briefly go elsewhere for care: for three months in 2016, he was under observation by a team of specialists in Hamilton who concluded he shouldn’t be taking up a hospital bed. It was a difficult time, Kareen Rekowski said — she was left running the business out her hotel room, while her brother ended up “isolated” from family and friends back in Renfrew​​​​​​.

These days, she and their mother Irene try to get Rekowski out of the hospital as much as possible: strolls along the Bonnechere River, Saturday night car shows at the local burger joint, twice-weekly workouts at a local gym.

Then there are the trips to the nearby Tim Hortons, where people who know Rekowski stop by and say hello — moments his sister calls “our escape from the hospital.”

As they wait, Kareen Rekowski has been part of a local group working with Pathways to Independence — an Ontario not-for-profit that provides care to people with brain injuries — on securing funding for a home one day in Renfrew.

She said they’ve submitted a proposal, and they’re now waiting to find out what comes of it.

“It’s really vital, because Ken’s now been residing in the hospital for over 10 years,” she said. “It’s not the ideal environment for somebody to live.”