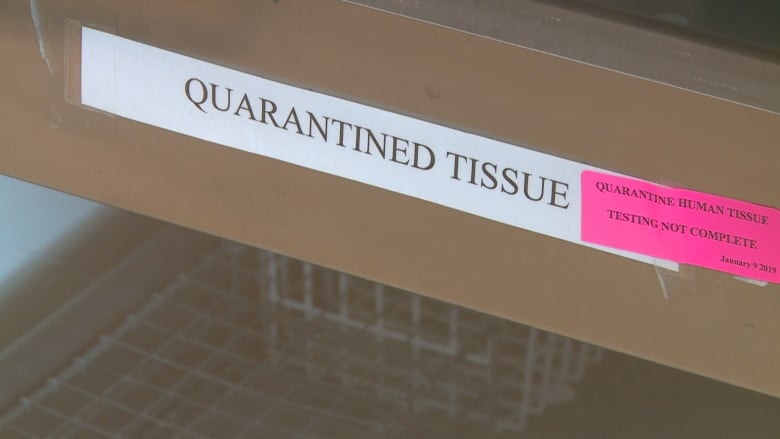 New Brunswick has missed the opportunity to screen more than 1,800 potential tissue or ocular donors because no one was available to screen them, according to new figures obtained by CBC News through access to information.

The numbers, which capture the period April 2017 to September 2019, show the province has widespread gaps in its tissue and ocular donation program.

The figures don’t capture organ donation, which is separate and runs 24 hours a day, according to Horizon Health Network, which operates the New Brunswick Organ and Tissue Program.

Horizon estimates about four per cent of potential donor “referrals” will become tissue or ocular donors.

That would mean the 1,851 missed potential donors could have translated into about 74 actual donors, giving life-altering tissue or ocular donations such as corneas, tendons and bones.

The numbers were “shocking” and “disappointing” for Michelle Astle, whose 16-year-old son, Avery, was one of the 1,851 missed potential donors.

“I think people in general have a trust that our system is not failing their citizens, their customers,” Astle said.

“However, with those stats, it’s proving that we are failing.”

The Astles remember their son as someone who always did the right thing and always wanted to help others. While they don’t believe Avery could have donated his organs, they were at least hoping he could provide a tissue or ocular donation that could help improve someone else’s quality of life.

But when the Astles asked staff at the Moncton Hospital about donating Avery’s organs and tissues, they say they were told no one was available to facilitate the donation.

Earlier this year, provincial Health Minister Ted Flemming noted in the legislature that the crash happened “late at night on a Saturday between a Good Friday holiday and an Easter Sunday holiday.”

“Sometimes, things like this unfortunately and regrettably happen,” Flemming said in the legislature on May 9, adding that he would “work hard to try to see that it is improved.”

But Astle said the statistics show it isn’t just a problem on holiday weekends.

“That obviously wasn’t the case, because you’re going month to month to month, and that many people not getting assessed,” she said.

‘Still work to be done’

In addition to Avery, 62 other potential donors weren’t screened in April because the program was closed or there was no technician on call, the figures show.

The month with the highest number of missed screenings was December 2018, with 112.

According to the data provided by Horizon, the program could be closed for a variety of reasons, including that the retrieval team is already working on a recovery for another donation. A technician might not be on call because of a “staff shortage and planned or unplanned absences.”

No one from the health authority was made available for an interview.

In August and September, the most recent months for which numbers are available, the program missed screening 31 and 27 potential donors, respectively.

“While Horizon acknowledges there is still work to be done in terms of addressing the gaps that continue to exist in our ocular and tissue programs, it is clear we are making progress,” Nadya Savoie, director of the New Brunswick Organ and Tissue Program, wrote in an emailed statement.

Savoie said the program has been able to hire and train new staff members, which has increased on-call service.

In comparison, the Nova Scotia Health Authority’s Regional Tissue Bank is “always operating” with a full staff complement, according to an emailed statement from Harold Taylor, health services manager of the tissue bank.

Nova Scotia’s program has missed only five donations since April of this year.

“We have recently developed a service delivery model for tissue donation to be efficient and sustainable in the face of new legislation, and have developed a more effective referral process,” Taylor wrote.

A spokesperson for Eastern Health in Newfoundland and Labrador said that province “does not have an ocular or tissue donation program.” Instead, the province imports tissue, including ocular tissue, for transplants.

Prince Edward Island doesn’t do tissue and ocular donation, according to a spokesperson for Health PEI. Potential donors are referred to the Nova Scotia Health Authority’s Regional Tissue Bank.

In New Brunswick, in cases where a family wants to donate but no one is available to screen the potential donor, a new policy means there will always be a program member available to answer family members’ questions, Savoie wrote.

“We have already witnessed some successes as a direct result of this measure and are optimistic that will continue to be the case moving forward.”

But Astle said the new policy isn’t good enough because it still relies on family members to ask about donation.

“I can see why many wouldn’t [ask] because you’re in such grief and shock,” Astle said.

‘We need to do better’

In the eight months since she said goodbye to Avery, Astle has had many dark days. But she’s also seen some light.

The Astles have started a campaign called Let’s Act 4 Avery to spread the word about donation, and she believes his story has already had an impact.

On her Christmas tree, she’s hung several ornaments made in Avery’s memory.

“There’s been a lot of really good things to come out of it,” Astle said.

But she believes there’s more to be done to make things better.

Horizon’s statement doesn’t mention what prompted a new policy and changes in the tissue donation program. That doesn’t sit well with Astle.

“The only reason those changes have happened is because we stood up and we spoke up. It’s because of Avery,” she said.

“So to me, at least own that and say, ‘Thank you, and because of your son these changes have been made to help others.'”

Asked what Avery would think about the number of missed potential donations, Astle said her son always found a way to see the good in everything. She doesn’t think he would have wanted to dwell on the negative.

“It would be, ‘Well there’s a chance there to help save others and they’re doing the best they can,’ would be what Avery would say,” Astle said.

“But mother bear kicks in and says, we need to do better.”