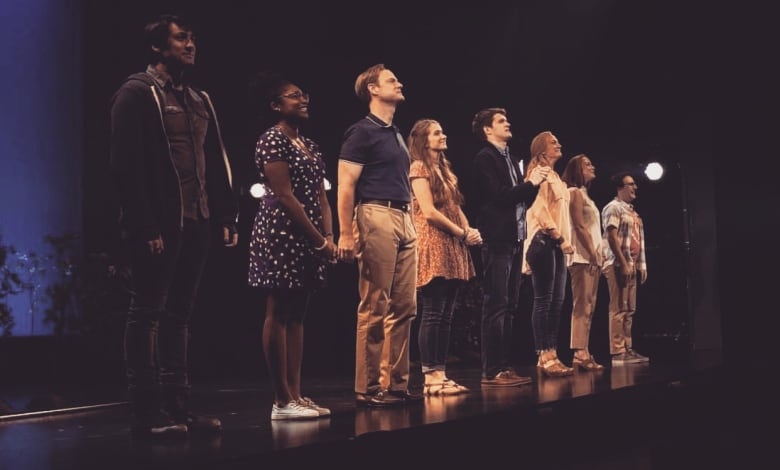 Growing up and attending high school in Medicine Hat, David Jeffery didn’t really know what he wanted to do with his life — he just knew he really enjoyed performing.

In the sixth grade, he was given the lead role in a school production of Hamlet, and it made him realize something about himself.

“The thing that stands out to me was, ‘Oh, I really like doing this,'” Jeffery said. “At that moment it wasn’t like, ‘This is what I want to do forever,’ but it gave me some internal satisfaction.”

After graduating high school, Jeffery took close to five years off while performing in community theatre in Medicine Hat.

But eventually, he decided to make a move to Ottawa to pursue schooling in marriage counselling instead.

“In and amongst my studies, I went New York City and I saw Dear Evan Hansen on Broadway,” Jeffery said. “I thought, ‘Wow. I really love that show.'”

Dear Evan Hansen centres on the eponymous Evan Hansen, a teenager with social anxiety who begins writing himself letters based on the recommendation of a therapist.

When one of these letters falls into the hands of Connor Murphy, a troubled student at Hansen’s high school, the fate of the two characters become linked.

The musical won six awards at the 71st Tony Awards, including Best Musical and Best Score.

More than any play he had ever seen before, Jeffery said he felt himself represented onstage.

“I’ve never seen a show look at issues like anxiety and represent it on stage so well,” he said. “The show really represents society and life, and particularly what young people are going through right now.”

On a whim, Jeffery decided to send in an audition tape to the producers of the Broadway show. He ended up hearing back, and made it through five rounds before communication went quiet.

When the Toronto production concluded in July 2019, Jeffery was asked to join Dear Evan Hansen‘s national tour. When the actor who currently plays Connor Murphy on Broadway announced he would not return to the role, it was offered to Jeffery.

He said it’s difficult to put into words how he felt when he was offered the part.

“It was a surreal moment on the phone. You’ve had that dream in your head, and you play out that exact scenario in your mind so many times as a daydream,” he said. “When it actually happens, it’s kind of a dream come true moment.”

Jeffery said he was standing next to a fellow cast member when he received the call.

“They just broke down and wept in my arms,” he said. “It was pretty funny, but it was a surreal moment that I’ll probably never forget.”

As Connor Murphy is a complex and troubled character, Jeffery said it will be a challenge to portray him on stage eight times each week. But he said the character’s familiarity — and the level to which audience members connect with him — make him a joy to play on stage.

“At the stage door after the show, there are always people who stop you and say, ‘That was me. I was really struggling,'” Jeffery said. “The best part of the whole experience is meeting these people after the show. I’m most excited to continue that.”

Jeffery will take over in the role on Feb. 11. He said he was “honoured and humbled” that the producers selected him.

“They’re big shoes to fill. I’m ready for the challenge of hopefully bringing a certain level of professionalism to the stage every night,” he said. “People pay premium prices to see these shows, and I want to be worthy of the stage I’m on.”