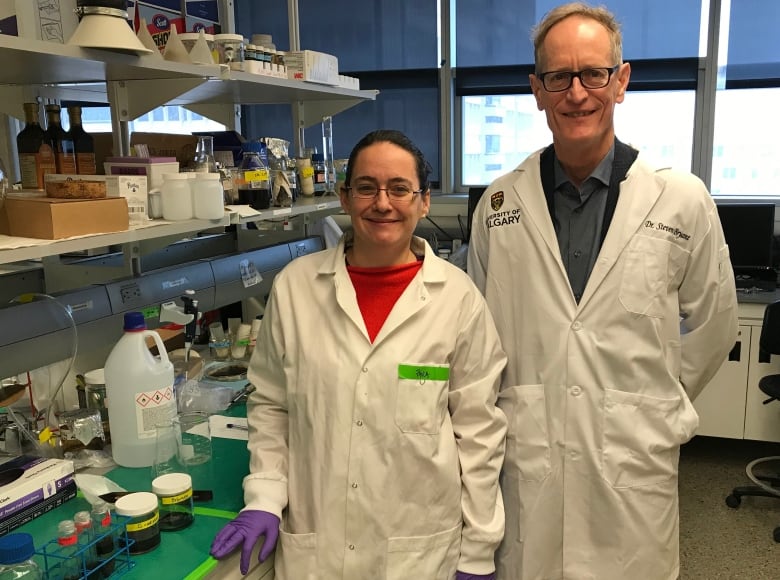 Wastewater from oilsands mining operations have long been a challenge for Canada’s energy industry, much of it ending up in industrial tailings ponds.

But scientists and engineers at the University of Calgary are taking aim at eliminating watery tailings from the oilsands production process with the help of specialized liquid salt.

Hot water is used in oilsands mining operations to extract the oily bitumen from the sand, with the resulting wastewater ending up in tailings ponds to settle and later be reused. Alberta has an estimated 1.3 trillion litres of fluid tailings sitting in tailings ponds.

By using ionic liquids instead of water in the extraction process, the researchers say they can eliminate the production of watery tailings, while the ionic liquids can be recycled. They anticipate the leftover sand can be returned to the ground.

The ionic liquids and the resulting sand are not toxic, they say.

“We have found a way, using advanced materials, to do the extraction of bitumen from oilsands efficiently, using much less energy and without using any water at all, and thereby eliminating the tailings issue,” said Bryant, a part of the university’s Schulich School of Engineering.

Taking it out of the lab

They believe the ionic liquid process could be used by in-situ projects as well. The team, which received funding from the Canada Excellence Research Chairs Program, has obtained a patent and the work was recently published by the American Chemical Society.

The team’s next goal is to test the work outside the laboratory in a pilot project, and scale up their research.

“We’re quite optimistic about the need for new approaches,” Bryant said. “If we can eliminate tailings from future developments that would be a huge advantage over existing processes.”

Scientists have been researching ionic liquids (salts with organic cations that melt at low temperatures) for decades, but they have become a major subject of study for modern chemistry.

Because they can dissolve many things and have a low volatility, some of them have been referred to as “green” solvents and used in chemical processes including separation and purification.

“Another property of these materials in general, I would say, is that they are really stable,” Berton said.

The researchers say the ionic liquids will also work at ambient temperature, meaning less energy is needed in the process and, therefore, fewer carbon emissions.

Because the ionic liquids are recycled immediately, Bryant explained, the volumes required are much smaller than the volumes of water used in current processes.

“There are lots of reasons these are not your granddad’s solvents,” Bryant said.

Nina Lothian, director of the fossil fuel program of the Pembina Institute, a green energy think tank, said mining oilsands without tailings is a concept that industry has been exploring for a long time.

“I think there’s a lot of potential in it,” Lothian said.

“I would applaud efforts to figure out technology that would mine oilsands without producing tailings, but that doesn’t eliminate the [existing] tailings that we have on the landscape today.”

Tailings are a priority

Alberta’s oilsands tailings ponds have faced criticism from environmentalists for years, gaining international attention in 2008 after the deaths of 1,600 ducks.

The water in tailings ponds contains contaminants ranging from salt and heavy metals to polycyclic aromatic hydrocarbons and naphthenic acids.

Canada’s Oil Sands Innovation Alliance (COSIA), which coordinates research for 13 oilsands companies, has identified tailings as one of its key environmental priority areas.

A COSIA spokesman said they are aware of the U of C researchers’ work.

“The use of ionic liquids … is one of the numerous treatment technologies that are being researched and developed to improve tailings management,” Rob Gray said in a statement.

“This work is in the early stages and is not currently a COSIA project, but ionic liquids may become a tailings treatment of interest for COSIA in the near future.”