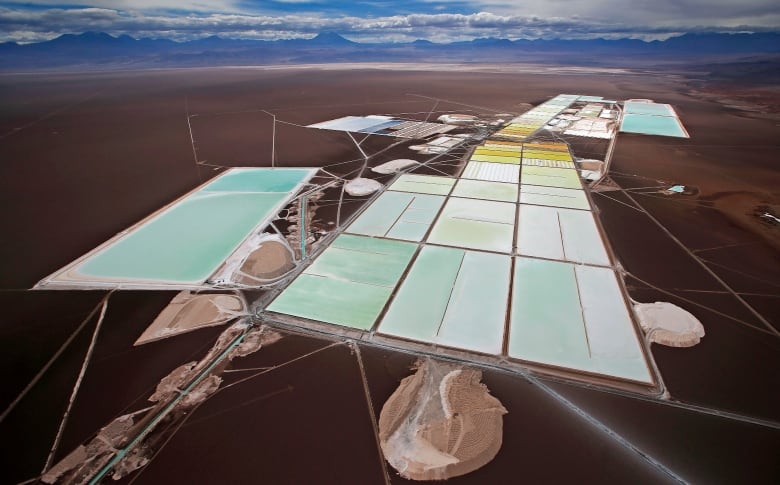 At gatherings of electric vehicle enthusiasts, the curious surround Rob Spritzer and his car. Both are celebrities in these circles — he’s known as “High Mileage Rob,” having driven more than 115,000 kilometres in his Tesla Model 3 in a little more than a year of ownership.

No other Model 3 in Canada is believed to have reached that milestone in such a short time, and it’s possible no other battery-only electric vehicle has either.

And not once has he stopped for gas. Never changed the oil.

He’s also trying to save the planet by eliminating greenhouse gas emissions. His car, like other zero-emission EVs, doesn’t have a tailpipe and a popular online carbon calculator shows it has a zero-carbon output.

But that doesn’t mean there isn’t a carbon footprint.

An electric car doesn’t produce emissions, but its parts still have a carbon footprint. We look at all the components of EVs, from how they’re charged to what’s in the battery to see how environmentally friendly they are. 7:25

Where does your power come from?

Some EV batteries today pack 10 times as much power as an average household uses in a day. And often, those electric vehicles are being charged at home.

Most of the electricity generated by North American grids has some greenhouse gas emissions connected to it. So even if a car isn’t belching carbon, it doesn’t mean it’s perfectly clean.

For instance, coal is about the dirtiest way to generate electricity to recharge a car battery. Powering an EV with electricity generated from coal is marginally better than burning gasoline in an internal-combustion engine, according to numbers compiled by Jennifer Dunn at Northwestern University’s Center for Engineering Sustainability and Resilience.

Most North American grids are composed of a mix of generating sources, from coal to hydro to nuclear. When that mix is taken into account, charging a car generally creates less than half the carbon emissions compared to gasoline, according to Dunn.

It’s only when electricity comes from clean, renewable sources like wind and solar that you see the most pronounced drop in EV emissions generated to power the car.

Where does your battery come from?

Before an electric vehicle even charges for the first time, however, one key part of its power system already has a significant carbon footprint.

“One really important aspect of an EV to think about is its battery,” explains Dunn.

“For example, the material that helps power the battery is produced from a number of different metals, things like nickel and cobalt and lithium.”

Mining and processing the minerals, plus the battery manufacturing process, involve substantial emissions of carbon.

Lithium mining, needed to build the lithium ion batteries at the heart of today’s EVs, has also been connected to other kinds of environmental harm. There have been mass fish kills in Tibet, for example. The freshwater supply is being consumed by mines in South America’s lithium-rich region. Even in North America, where mining regulations are strict, harsh chemicals are used to extract the valuable metal.

And all the operations are energy intensive, sometimes running on diesel generators and relying on carbon-emitting heavy machinery.

Adding to the cumulative effects on the environment, lithium demand is expected to at least triple by 2025, pushing more exploration and extraction globally.

And all that extracted raw material — once the batteries are worn out — will land somewhere.

It’s something Andrew MacDonald at Maritime Autoparts in Debert, N.S., is thinking about. His facility recycles car parts and he says it’s only a few more years before his industry will start seeing EVs and their lithium-ion batteries in the scrapyard.

“As pure electric vehicles come onto the market, there’s less wearable parts, so it’s going to change what we sell,” he says.

MacDonald adds that his company is already receiving nickel metal hydride batteries from early-model hybrids, and is figuring out what to do with them.

“We do our own research, but it would be nice to have better partnerships with the OEMs [original equipment manufacturers] to understand exactly what we’re dealing with, what are the best methods and procedures and policies in handling them,” MacDonald says.

“There’s lots of stuff going on in the research labs around the world, trying to figure out what to do with these things. But certainly there’s a big potential for what you can do with them,” he says.

One of those research facilities is the U.K.’s Faraday Institution, and it’s looking at ways to both reduce waste and extend the usefulness of all that lithium that’s being mined.

“There are going to be a lot of batteries that reach end of life. Out of those batteries, you’re going to find very valuable applications in second life,” says Gavin Harper, a Faraday Institution research fellow and the lead author of last month’s paper on battery recycling, published in the journal Nature.

He says if reuse is considered in the initial design, applications for batteries can be wide-ranging when their state of health — or charging capacity — is no longer adequate for an electric vehicle.

“The best option companies are looking at is to remanufacture cells into new battery packs for electric vehicles,” he says.

That means taking apart the individual lithium-ion cells that make up an EV battery, removing the unhealthy ones, and reassembling them for continued EV-use.

Beyond powering cars, there are other second-life applications being explored for lithium-ion cells, primarily rooted in energy grid and mobile energy storage, which can include acting as a power reserve for electric vehicle charging stations.

The challenge now is moving these kinds of applications beyond research labs and cottage industries.

“We need to make sure we invest time and energy to find the right way of doing things, and solutions that are to scale of what’s coming down the line,” he says.

Getting More out of Batteries

Across the ocean, a Canadian research lab is working on another aspect of lithium-ion research, and quite successfully.

Nova Scotia’s Dalhousie University is finding ways to extend battery range and lifespan, led by Jeff Dahn, who is something of an icon to battery players worldwide. Tesla’s Elon Musk has heralded his work, and Dahn himself led a group of researchers who proved the feasibility of a million-mile battery.

He’s trying to not only pack more power into batteries to boost the range of electric vehicles, he’s also working to increase the number of recharges possible without efficiency loss.

That was a hot topic of conversation at Canada’s largest electric vehicle gathering recently in Cambridge, Ont. There were discussions about how long a modern EV’s batteries will last, and the best practices to extend their lifespan (some tips: don’t use rapid chargers too often, don’t recharge unless you really need it).

High Mileage Rob is perhaps one of the people most consumed by these questions. He spends more time with his Tesla than his wife, he says. And he is intent on keeping both in his life for years to come.

WATCH | From The National, why it can be hard for buyers to find an electric vehicle:

The long-standing myths about electric vehicles one reason they aren’t everywhere and subject to months-long waits. David Common looks at why and some incentives that could boost supply of electric vehicles. 9:24