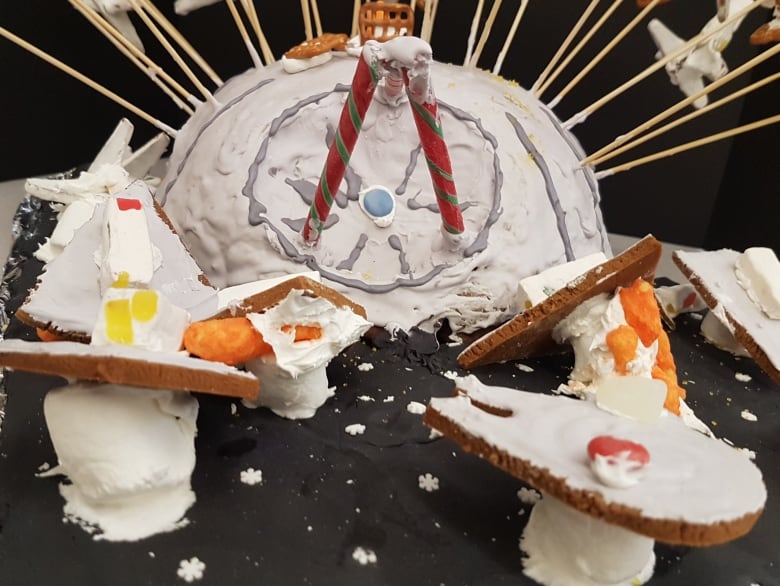 Gingerbread and nougat X-wings, pretzel TIE fighters, and gingerbread Star Destroyers fly around a Death Star in a sugary sweet tribute to the Star Wars franchise.

This holiday season, to celebrate their shared passion for Star Wars and the release of Star Wars: The Rise of Skywalker, Jones and Theo took on the infamous Death Star.

Theo came up with the idea, and the family spent three weekends creating a Star Wars scene, this week put on display at his school, Dundas Central, in suburban Hamilton.

They made ‘half’ a Death Star out of gingerbread, which they baked over a bowl to get the right shape and filled with Rice Krispies — Theo’s favourite part. The whole thing was covered in grey icing.

More than two dozen ships battle atop skewers and Darth Vader’s TIE fighter, Theo’s favourite ship, falls from the sky in the back. Candy canes shoot out of the Death Star’s front, coming together in a beam that threatens to destroy a planet.

It took a two-hour trip to Bulk Barn to get the best possible wings for the TIE fighters and proper nose for the X-wings.

“We actually ended up with a fair bit of leftover candy because we tried to pilot a few different things and they weren’t so successful.”

For Jones, A New Hope was among the first movies she saw in theatres and sparked her lifelong love for R2-D2, its cantina scene, and “kick-butt” women like Princess Leia.

“I’ve had a love of Star Wars for all my life,” she said. “It’s actually really fun having it be something our family can share and I’m pretty happy [my son and partner] like it as much as I do.”

Theo says he likes it because of all the fighting in space. But he also likes that it keeps him coming back every time.

“It’s a cliffhanger every movie,” he said. “Once you watch the first, you gotta watch every single other one.”

While the moral stories might be cut and dry, Jones said, there’s something charming about entertainment where the audience knows who’s evil.

“It’s very much a good versus evil universe,” she said. “There’s not a lot of shades of grey in it, which can be refreshing in times where it’s harder to tell what’s good and what’s bad.”

The Death Star will succumb to Theo and his classmates, who will break it apart and eat it before heading on holiday break.