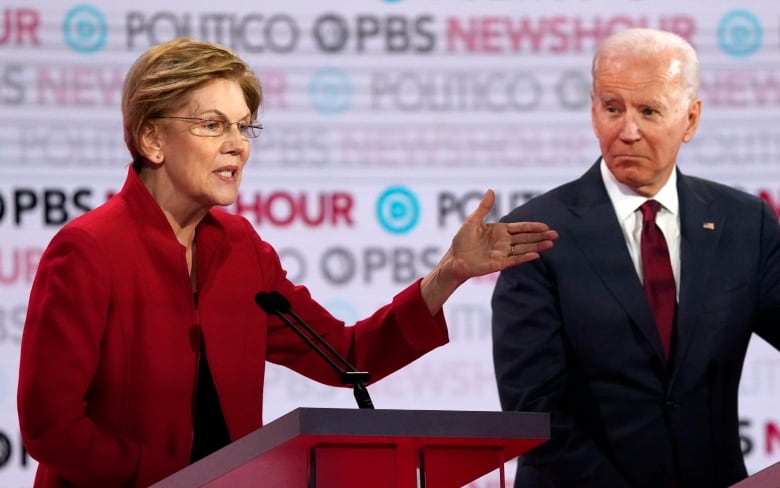 Seven candidates shared the stage in Los Angeles in what was their party’s final presidential debate of 2019, but it was Pete Buttigieg, the 37-year-old mayor of South Bend, Ind., who saw the most incoming fire on the debate stage. Elizabeth Warren seized on his reliance on wealthy donors while Amy Klobuchar challenged his experience in what opened as a tame event but intensified as time went on.

In the most pointed exchange, Warren, a 70-year-old Massachusetts senator, zeroed in on Buttigieg’s recent private meeting with wealthy donors inside a California “wine cave,” the details of which were detailed in a recent Associated Press story.

“Billionaires in wine caves should not pick the next president of the United States,” she charged.

Buttigieg, who has surged into the top tier of the Democratic Party’s 2020 primary in part because of his fundraising success, did not back down.

“We need to defeat Donald Trump,” he responded, noting that Trump’s campaign has already accumulated hundreds of millions of dollars. “We shouldn’t try to do it with one hand tied behind our back.”

Democratic presidential candidates Elizabeth Warren and Pete Buttigieg argue over fundraising and the best way to do it. 0:59

The clash underscored broad questions that loom over the Democratic Party’s 2020 contest just 46 days before primary voting begins: Democrats are not close to unifying behind a message or messenger in their quest to deny Trump a second term.

In fact, as Thursday’s debate hinted at, the party is still consumed by a high-stakes tug-of-war between feuding factions that must ultimately come together to beat Trump next November. One side, led by Warren and Vermont Sen. Bernie Sanders, is demanding transformational change to the U.S. economy and political system. The other, led by former vice-president Joe Biden and Buttigieg, prefers a more cautious return to normalcy after Trump’s turbulent reign.

Weighing in on the ideological fight, billionaire activist Tom Steyer dinged Buttigieg for not having a more aggressive plan to combat climate change.

“I would call on Mayor Buttigieg to prioritize this higher,” Steyer charged.

“We have to summon the energies of the entire country to deal with this,” Buttigieg responded. “I’ve seen politicians in Washington saying the right things on climate change as long as I’ve been alive.”

Buttigieg, who is polling well in early voting states Iowa and New Hampshire, has grappled with questions about his fundraising, an issue that has exposed the fissure between the moderate and progressive wings of the party.

Over just the last week, he hosted wealthy donors at a California wine cave, disclosed consulting work for a big insurance company that preceded layoffs and released a list of wealthy bundlers. His challenges with black voters are well documented, but suddenly, Buttigieg’s corporate connections are beginning to alienate the party’s progressive activists.

Protesters aligned with Warren and Sanders tracked him across New York City during a recent fundraising swing, banging pots and pans and calling him “Wall Street Pete.” The 37-year-old seemed genuinely confused by the protests, which he was forced to acknowledge during at least one Manhattan fundraiser because the noise outside was so loud.

“I do not sell access to my time,” Warren said of Buttigieg’s aggressive fundraising schedule.

“As of when, senator?” Buttigieg fired back, referring to Warren’s reliance on wealthy donors before becoming a presidential candidate.

Amid the ideological fight, Democrats faced a pointed challenge directly related to their need to build a diverse coalition to win the general election. For the first time this primary season, no black or Latino candidate appeared onstage.

The omission was embarrassing, at best — and politically dangerous, at worst — as Democrats fight to convince people of colour that they’re not taking their vote for granted.

Asked what message the lack of diversity on the debate stage sends, Sanders tried to shift back to the previous discussion about climate change.

Admonished by one of the moderators to stick to the question, Sanders countered that people of colour will suffer “the most if we do not deal with climate change.”

The only nonwhite candidate on stage, Andrew Yang, called it “both an honour and a disappointment” to be the only candidate of colour on the debate stage. He said he missed California Sen. Kamala Harris, who folded her campaign this month, and New Jersey Sen. Cory Booker, who failed to qualify. “I think Cory will be back,” Yang predicted.

Watch Yang talk about being the only candidate of colour in the debate:

Andrew Yang expresses disappointment at being the only candidate of colour at the final Democratic presidential candidates debate of 2019. 0:38

Despite the potential for discord, the early moments of Thursday’s debate offered only mild distinctions between Democrats who, above all, share criticism of the Republican president’s vision for America.

“The president is not king in America,” said Minnesota Sen. Amy Klobuchar, who is preparing to serve as a juror at Trump’s impeachment trial in the Senate. Alluding to former President Richard Nixon, she added, “If the president claims that he is so innocent, then why doesn’t he have all the president’s men testify?”

Biden knocked Trump’s argument that less than half of Americans support his removal from office.

“He’s dumbing down the presidency beyond what I even thought he would do,” Biden said. “We need to restore the integrity of the presidency.”

Watch Biden talk about how he’d work with Republicans:

Former vice president Joe Biden talks about whether he would be able to work with Republicans, given their attacks on him and his son. 0:31

The candidates also railed against Trump’s economy, despite outward indicators that the economy is doing well.

The U.S. unemployment rate stands at a half-century low of 3.5 per cent, backed by consistently strong job gains in recent months that have largely squelched fears of a recession that had taken hold over the summer.

“This economy is not working for most of us,” Buttigieg said.

“The middle class is getting killed,” Biden added.