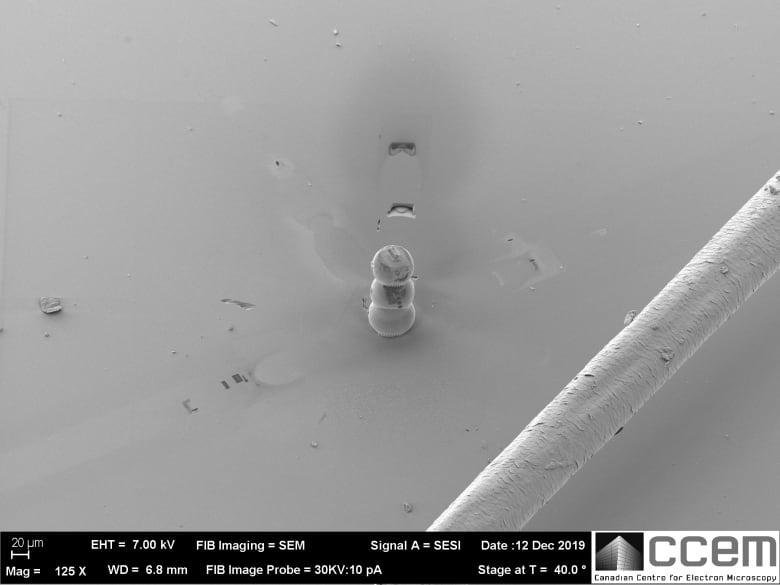 Decking the halls is a whole lot harder when you’re decorating something 10 times smaller than a human hair.

But that didn’t stop Travis Casagrande from going big this holiday season by constructing something super tiny.

The research associate at the Canadian Centre for Electron Microscopy at Hamilton’s McMaster University is the man behind what may be the smallest house ever built — about half the size of one made in France last year.

Casagrande’s creation is a home for the holidays — a gingerbread house complete with a wreath over the door, a cheery brick chimney, Christmas tree details carved into the walls and a patriotic Canadian flag doormat.

“Compared to the size of a typical gingerbread house that you might buy in a grocery store kit, mine is 20,000 times smaller,” he explained.

But the festive surprises don’t stop there.

Zoom out slightly from the silicon structure and you’ll see it’s actually perched atop a smiling snowman that’s giving a mischievous wink. Pull back even farther and a seemingly massive cylinder appears — believe it or not, that’s a human hair.

Each of those steps was intentional, explained their creator.

“The point of that was sort of to make some jaws drop when you realize even the snowman, which is much bigger than the house, is extremely tiny compared to the hair you see next.”

Casagrande used a focused ion beam microscope to etch out the microscopic details with a beam of charged gallium ions, which he compared to a sandblaster.

It’s the same tool he and other staff members at the centre rely on daily to prepare even smaller samples for research they conduct for a wide range of sectors, including the automotive industry, electronics and nuclear material.

“We are helping researchers understand the structure and properties of materials, and this is in order to solve problems and make things stronger, lighter, last longer, more affordable, more efficient,” said Casagrande.

“The research work that’s done at our facility contributes to future technology, and that ultimately makes the world a better place.”

The snowman and his fancy topper are more for fun, but Casagrande said they also serve an important purpose.

“We wanted to remind the scientific community of our expertise in electron microscopy. And for the public, I wanted to spark some curiosity of science because that leads to better science literacy.”

Rolling a snowball isn’t exactly difficult, but creating the spheres that form the snowman’s body was actually one of the harder parts of the process, according to Casagrande, who said those pieces were larger than what he typically works with.

“There are a lot of opportunities where things can go wrong in the making of this — and they did,” he said. “There’s no undo button.”

The research associate figures images of the gingerbread house will be used for years during tours and training sessions to illustrate what the centre can do.

A lot of planning went into the effort, but despite his painstaking attention to detail, one thing seems to have slipped by even Casagrande.

Given he’s the creator of such a tiny house, the translation of his last name is more than a little ironic.

“Right, that means big house,” he said with a laugh. “I didn’t think of that. That’s a pretty funny connection.”