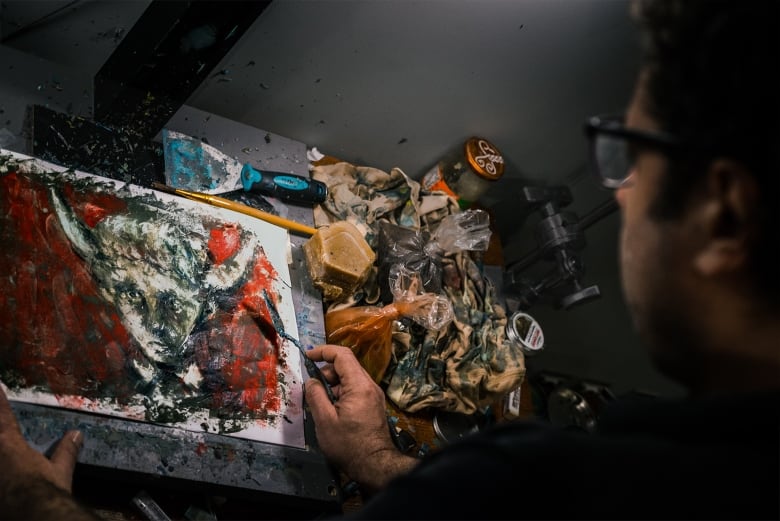 Montrealer Theodore Ushev says he’s “never felt more happy” than when he was hand-painting more than 15,000 images with beeswax and resin to make his new animated film The Physics of Sorrow.

The short film, released in 2019 by The National Film Board of Canada, is believed to be the first animated film to use this technique, known as “encaustic painting.”

It was shortlisted this week for best animated short at the 92nd Academy Awards, which airs Feb. 9, 2020.

“I felt extremely satisfied and happy doing the film because basically it has been a very personal film,” Ushev told As It Happens host Carol Off.

A story of immigration and separation

The movie is an adaptation from the Bulgarian writer Georgi Gospodinov’s novel of the same name about a man reminiscing about his childhood as he struggles to find the meaning and purpose of his life.

Ushev, who immigrated to Canada from Bulgaria in 1999, says the story reminded him of his own journey and life.

“It is a story about an immigrant in search of his identity and trying to find a new home because a home is not a house. It is something very different,” he said.

His own father died during the making of the movie, Ushev said. He never got to see the finished product.

“Basically the story is of a disjoint[ed] family and a separated family from far away,” he said.

In order to make the film, Ushev says he wanted to use encaustic painting to make it appear like a time capsule through someone’s life.

The old technique involves adding coloured pigments to heated wax, then applying the final product to a canvas.

But animating the film with these types of images was a challenge. As far as he’s aware, it’s never been done before.

Luckily, Ushev found a very old recipe for encaustic paint mix from his father, who was a painter, which helped him get started.

As he worked, Ushev would often paint with one hand and use a hairdryer or a heat gun in the other.

“This technique is very physically demanding, so I was doing my workout every day,” he said. “It was good for my physical condition as well, not only for my spirit or expressing my artistic ideas.”

Using wax to paint also helped him capture the mood for the film, he said. When animating, he tried to capture what it is like to have memories.

“When you work with this technique, you have to work very fast, you have to paint very fast. You don’t have time to go into details,” he said.

“Sometimes, you just lose details and it becomes blurred. That’s what I tried to use making the film, by being as close and being as honest at the same time.”

There were moments where the filmmaker doubted himself during the process, he said. At times, he says he even questioned whether he could make it to the finish line.

But thanks to his father’s recipe, Ushev eventually figured out the technique.

“It’s not a perfect film, I am absolutely conscious about it,” he said. “But somehow, this imperfectness…is what is enchanting to people.”

If nominated for an Oscar in January, The Physics of Sorrow will make Ushev a two-time nominee. In 2017, the animator was nominated for his animated short film Blind Vaysha.

Still, being shortlisted for the Oscar is significant for Ushev because he says the media attention will allow even more people to see his movie.

“It just helps you that your film is seen by more people, so more people can … recognize themself in this story.”