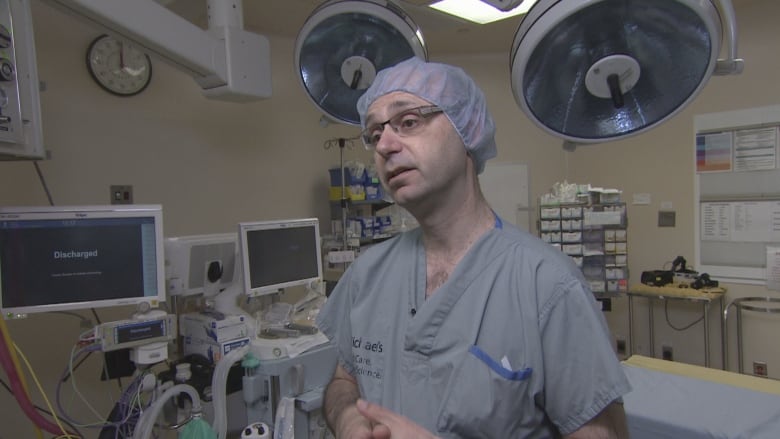 Brain surgery boys club: Meet the brains behind the push to get more women in neurosurgery | CBC News

As the medical director of Toronto’s Krembil Brain Institute, Dr. Gelareh Zadeh is at the top of the neurology — more specifically, neurosurgery — industry. But throughout most of her journey to get there, she says she’s been the only woman in the room.

“When I was younger and in residency I kept thinking one day it’ll change,” she said.

Part of the reason operating rooms are lagging in diversity, Zadeh says, is because men at the top are not making space for it.

The talent has always been there but we haven’t been making the space for it.– Dr. Michael Cusimano, St. Michael’s Hospital

According to the Canadian Medical Association, only 11 per cent of the 333 total neurosurgeons practicing in Canada are women.

But strides are being made at the hospital level to change that.

St. Michael’s Hospital, for example, usually sees one woman resident training in the neurosurgery specialty. This year there are seven.

Dr. Michael Cusimano, the hospital’s neurosurgery department lead, says it’s up to people in the industry to make space for diversity.

“The talent has always been there but we haven’t been making the space for it,” he said.

I actually tried every other surgical specialty desperately hoping that anything else would stick.– Dr. Teresa Purzner, neurosurgical resident

So, when it came time to accepting neurosurgical residents into this year’s program, Cusimano sought to do just that.

“Society has been lagging behind in attracting women to the [brain surgery] specialty and bringing them up through the ranks and taking on leadership positions as things move along.”

Brain surgery is often an on-call life, full of high stakes surgeries where doctors work for hours holding a patient’s life, or at the very least their motor function or cognition, in their hands.

One false move and the patient can wake up with a different personality.

“It’s that acuity that made me choose neurosurgery,” said resident Dr. Han Yan.

She says the balance will improve as soon as more operating room doors (so to speak) are opened to women.

“I remember when I was a medical student there was a male resident who was like ‘Oh I developed a great relationship with my mentor … we use to go to hockey games and grab beers after work,’ and I remember thinking … am I going to have that opportunity?”

Now that she’s in her third year of residency and working alongside six other women, Yan says she feels encouraged.

“Just being able to see more women who will become staff one day with whom I can develop a close relationship with is very valuable.”

‘It’s nice to have women around’

Dr. Teresa Purzner says a decade ago she was the only woman in any of her placements.

She’s married to a brain surgeon so she didn’t just hear about how demanding the work was, she experienced it by proxy through her husband.

“I actually tried every other surgical specialty desperately hoping that anything else would stick,” said Purzner.

“I just didn’t like anything else like I liked neurosurgery. So ultimately, I begrudgingly went into the specialty.”

She’s a sixth-year resident at St. Michael’s Hospital and says being surrounded by more women has helped in establishing a work-life balance at least, or at least a brain surgeon’s version of it.

“There are certainly challenges unique to being a mother so it’s nice to have women around to bounce ideas off. Sometimes pragmatic ones like how do you find a nanny who works neurosurgical hours,” Purzner said with a laugh.

“I’m not sure a work-life balance is really something that’s attainable [in this discipline],” says second-year resident Dr. Nardin Samuel, who’s recently come back to work after giving birth to her son Theo.

“Maybe it’s not about conceptualizing it as a balance but an integration into your life,” she said.

“But at the same time it’s challenging to leave your kids in the morning or at night when you’re on call. But on the other side of that, it’s rewarding when you’re doing something for yourself something that you’re really enjoying as well.”

And for any medical students out there, Purzner has a message:

“There can be specific challenges for women but just know that there are a lot of other females now in neurosurgery who are really rooting for you.”