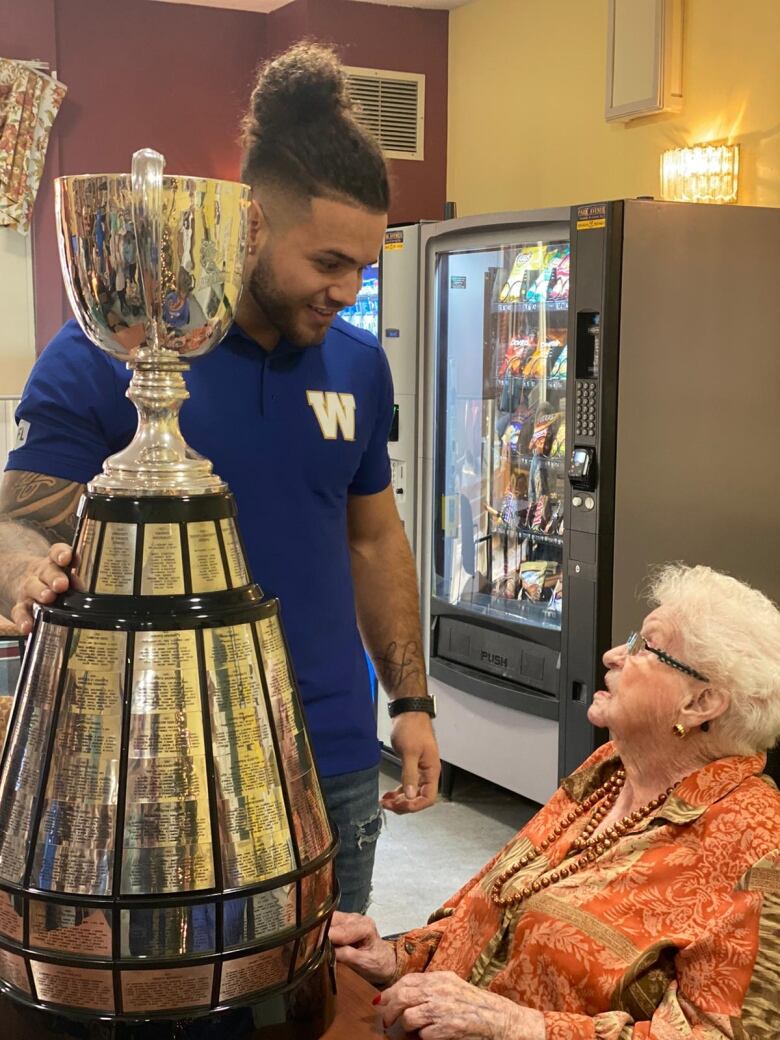 When the Blue Bombers won the Grey Cup, it was Ruby Fraser’s dream to see it up close.

The 107-year-old says she’s their biggest fan, so employees at her personal care home posted her request to Facebook, prompting running back Brady Oliveira to spring into action.

“As soon as I saw the video, it was a no-brainer that I’m like I need to find a way to bring the cup to Ruby,” he told Up to Speed host Ismaila Alfa.

So extremely happy that this video of Ruby found its way to me! Ruby is 107 years old and finally got to see the 107th Grey Cup! Once I saw the video, I had to pay her a surprise visit! Days like these are moments that I will never forget! Ruby you are my champ 🖤 🏆 <a href=”https://t.co/cYKVNKHtqS”>pic.twitter.com/cYKVNKHtqS</a>

Oliveira made good on his personal pledge on Wednesday, bringing the cup to Oak View Personal Care Home in Winnipeg, where Ruby lives.

“She’s got a little spunk to her, a little cheer to her. And as soon as I walked in there I was like ‘Ruby look what I got for you!’ She’s like ‘Oh!’, like, just a little cheer of joy and you know she’s still got it,” he said.

“It was just, you know, so much joy in that one moment. Just going there [Wednesday], that’s a moment that I’ll never forget.”

Ruby was fascinated by the cup, remarking that it was almost bigger than her, and wanting to see all of the history engraved on it. Oliveira said.

Ruby is a huge sports fan, with a “wall of fame” of all her favourite sports stars in her room, said Kara Thomas, administrator at Oak View Personal Care Home. She even played hockey herself — in the 1930s, using Eaton’s catalogues for knee pads when she was a goalie.

“I think you’d be hard-pressed to find a bigger sports fan than Ruby,” Thomas said.

“I mean, there was at least 100 people wanting pictures and to touch the cup,” Thomas said.

“It really meant a lot to everybody and it meant so much to the residents who have given so much of their lives to our society and our community.”

It meant a lot to Oliveira, too, to be able to give something back to the community.

“That’s where I find true joy in life, is giving giving back in general to others,” he said.

The visit could even be the start of a beautiful friendship. Oliveira said he loved talking to Ruby about her life and love of sports, and plans to pay another visit to the personal care home.