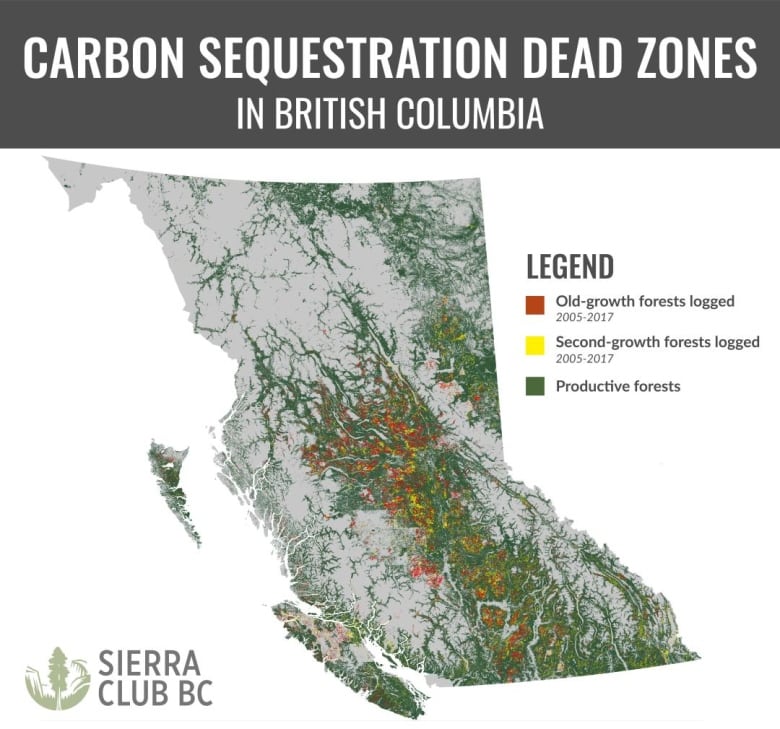 The clear-cutting of B.C.’s forests is contributing more to greenhouse gases than the burning of fossil fuels, according to a new report from the Sierra Club of B.C.

The report found that 3.6 million hectares of old-growth and second-growth forests were clear-cut in the province between 2005 and 2017 — creating  “dead zones” that, combined, are larger than Vancouver Island.

It says the clear-cuts create carbon sequestration dead zones that put more carbon into the atmosphere from decomposing matter and soil than newly replanted trees can absorb.

“That’s a very significant portion of B.C.’s forest,” said Jens Wieting, the author of the report. “And that’s also the combined area of clearcuts that will not help in the fight against climate change.”

According to the environmental group’s analysis of provincial data,  logging puts 42 million tonnes of carbon emissions into the atmosphere per year, as well as another 26 million tonnes that can’t be recaptured for at least 13 years, while newly planted trees mature enough to absorb the additional carbon.

“It’s a huge problem that the emissions from forests are not counted as part of our official emissions,” Wieting said.

Wietling says the 68 million total tonnes of carbon released into the air from clearcutting is greater than the 64 million tonnes the Environment Ministry says were released by fossil fuel emissions in all of 2017.

“[Those figures] are somewhat hidden at the bottom of an excel file that the B.C. government released,” Wieting said.

The forest’s ability to store carbon in the future is also reduced as the trees are cut down.

These dead zones are not just a problem in British Columbia but, according to the chief scientist with the U.S.-based Geos Institute, Dominick DellaSala, it’s some of the worst he’s seen.

“It’s shocking to me that a developed country that has such great policies overall is just chewing through its rainforest,” DellaSala said.

“Whenever I fly over the region, it looks like a Swiss cheese landscape … it’s devastation.”

Old-growth forests, like the ones in B.C., are particularly adept at capturing carbon and can store over 1,000 tonnes of carbon per hectare, which is one of the highest rates on earth.

“British Columbian coastal and inland rainforests have extraordinary carbon values that are exceeded by only a few places in the world,” he said.

Rik Logtenberg, a city councillor in Nelson, worries about how reports like the one coming out of the Sierra Club B.C. will impact public morale.

“We’re working our butts off to plan and think about reducing [our emissions],” Logtenberg said.

“When you look at all the work and expenses that we are being asked to bear and that we’re going to be asking our residents to bear, and then you look at forestry that sort of has a pass — it’s really hard to digest and it’s hard to sell.”