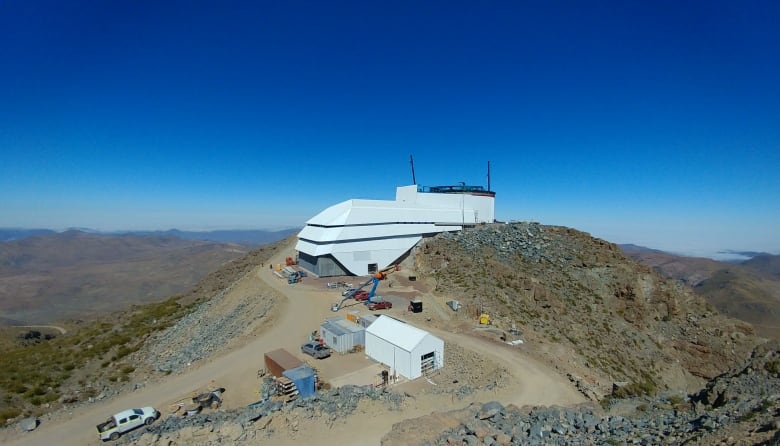 Our solar system has a new celestial visitor making a close approach to the sun just in time for the winter holidays. It’s no Star of Bethlehem, but this interstellar comet could provide a unique opportunity to learn about conditions in another solar system.

“It’s a leftover remnant of planet formation process in an alien system of planets,” said Greg Laughlin, a professor of astronomy at Yale University, in an interview with Quirks & Quarks host Bob McDonald.

Ukrainian amateur astronomer Gennady Borisov first spotted the comet in the constellation Cancer in August. It’s since been named after him: comet 2I/Borisov.

2I/Borisov is identifiable as a comet because ice sublimating off its surface has produced a diffuse cloud-like coma around it and a faint, broad tail in its wake.

It wasn’t until Borisov (the astronomer) announced his find, and other telescopes turned to track it that researchers realized how quickly it was moving — a fantastic 180,000 km/h. That meant that it wasn’t in orbit around our sun like other comets in our solar system.

“It became clear that it was an interstellar visitor that was just rushing through,” said Laughlin.

Comet 2I/Borisov is only the second-known interstellar visitor that astronomers have picked up with their telescopes.

We really should be seeing dozens, perhaps even hundreds of these over the coming years.– Greg Laughlin, Yale University

Back in 2017, astronomers were left scratching their heads when they spotted ‘Oumuamua, another celestial body that came from outside out solar system, which they believed to be a comet.

Laughlin said ‘Oumuamua was a surprising and unusual object

“It was tumbling end over end. It had this strange either very flat, pancake shape, or an elongated cigar-like shape,” he said. “It had no visible coma, yet it was emitting some kind of gas, which caused it to accelerate like a rocket.”

He said astronomers have already determined that 2I/Borisov is a more conventional object and more similar to our own solar system’s comets, which he finds “reassuring.”

“The fact that it has properties that are quite similar to the ones that we find here, is telling us — or at least hinting to us — that the situation that formed comets in our solar system is replicated elsewhere in the galaxy, which is quite an extraordinary realization,” Laughlin said.

Molecular fingerprint from another solar system

The comet came into our solar system from the northern sky and is currently making a wide turn around the sun. Its closest approach to the Earth will be about 300 million kilometres, and then it will make a southerly departure out of our solar system and into deep space.

As it moves closer to the sun, astronomers hope the comet will undergo eruptions of gas and dust. Solar radiation will heat the comet’s ice up, creating pockets of gas that can explode outward, providing a visible light show.

“That hasn’t happened yet, but we’re hoping for an outburst during the next days to weeks,” said Laughlin.

If it does flare up, he and his colleagues hope to probe the cloud of gas and dust it produces, to obtain a molecular fingerprint of the material it’s made of. This will help them learn more about the conditions in the alien stellar system that gave rise to it millions or even billions of hears ago.

Now we’re getting these kind of cosmic care packages from many of those [exosolar planets that kicked them out], and we’re able to observe pieces of alien solar systems up close.– Greg Laughlin, Yale University

Scientists have already begun taking spectroscopic measurements from the comet’s faint coma, which shows some similarities to our own solar system’s comets.

If it erupts with a thicker cloud of gas and dust, that would increase its signal allowing for even more measurements that could even tell them about its water content.

How did it end up here?

Scientists have no idea yet where this comet came from, but it almost certainly ejected from a young planetary system by gravitational interaction with a large planet.

“As a planet like Jupiter or Neptune — a really large planet — that’s relatively far away from the star grows larger and larger, it starts to really stir up the neighbourhood around it with its gravity,” said Laughlin.

Laughlin said he thinks Oumuamua and 2I/Borisov are likely the tip of the iceberg of interstellar visitors making an appearance in our solar system. We’ve probably had visitors like this before, but haven’t detected them.

He said in the next year or two, astronomers are expecting another large telescope — the Large Synoptic Survey Telescope (LSST) — to come online. It will scan vast swaths of the sky on a regular basis.

“This LSST should be a fantastic machine for detecting interstellar visitors. And we really should be seeing dozens, perhaps even hundreds of these over the coming years.”

The opportunity to detect and study interstellar visitors like ‘Oumuamua and Borisov and is an extraordinary development reminiscent of the excitement astronomers felt 25 years ago when they first started detecting exoplanets in other solar systems, Laughlin said.

“Now we’re getting these kind of cosmic care packages from many of those planets and we’re able to observe pieces of alien solar systems up close.”