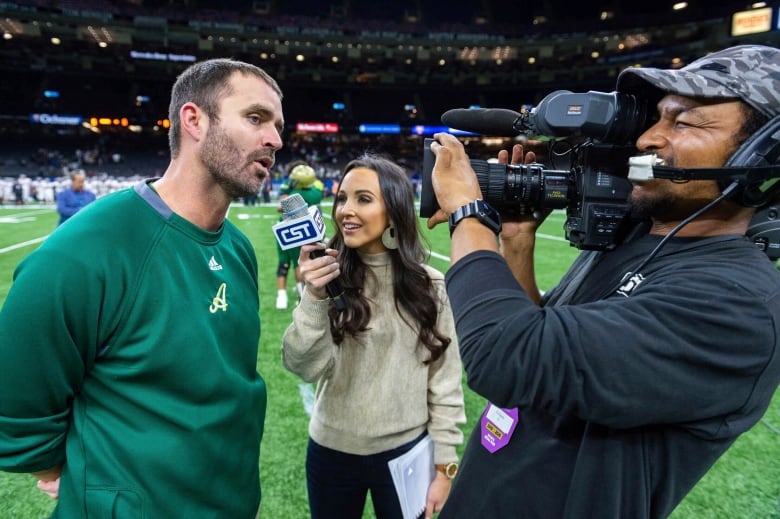 A small plane en route to a college football game crashed into the parking lot of a post office in Louisiana shortly after takeoff on Saturday, killing five people and fully engulfing a car on the ground in flames, authorities said.

The plane was en route to the Peach Bowl in Atlanta between Louisiana State University and Oklahoma, said Steven Ensminger Jr., who told The Associated Press that his wife, Carley McCord, was on board. Ensminger Jr. is the son of the offensive co-ordinator for the LSU football team. McCord was a sports reporter.

Ensminger Jr. said he was unable to go to the game and was at work when the crash happened. He said his father, Steven Ensminger, called him just before the elder Ensminger got to the stadium.

“I just don’t feel like this is real,” Ensminger Jr. told the Associated Press in an Instagram message. “I’m praying it’s not real.”

Video and photos showed a trail of scorched and burning grass around the crash site in the city of Lafayette. A blackened car sat in the post office parking lot, which was carpeted with scattered tree limbs.

Four people were brought to the hospital: one from the plane, one on the ground and two post office employees who were brought in for evaluation, said Lafayette Fire Department spokesperson Alton Trahan.

The plane went down in a part of the city with a scattering of banks, fast food chains and other businesses.

‘It could have been a lot worse’

Marty Brady, 22, said the lights went out at his apartment about 180 metres or so away from the crash site as he was preparing to make coffee.

He said he ran out and saw black smoke and flames from the post office parking lot and downed power lines.

“There were some people screaming and somebody yelled that it was a plane,” he said.

Brady said the plane clipped a power line over the gate to his apartment complex.

“If it had been a little lower, it could have been a lot worse,” he said.

Kevin Jackson told KLFY TV he heard a “massive explosion” and saw a “big old ball of flame” when the plane crashed. He and other eyewitnesses told the TV station that the plane hit a car as it fell, and that someone could be heard screaming inside the vehicle.

Louisiana Gov. John Bel Edwards sent a tweet asking for the public to join him and his wife in praying for the “families and friends of everyone affected by this terrible tragedy.”

McCord was a Baton Rouge native and sports reporter for WDSU-TV in New Orleans, according to her website. She also appeared as a sideline reporter for ESPN.

McCord previously worked in television in Cleveland, and she was a two-time runner-up in the Miss Louisiana pageant.

“We are devastated by the loss of such an amazing talent and valued member of our WDSU family,” said WDSU president and general manager, Joel Vilmenay. “Carley’s passion for sports journalism and her deep knowledge of Louisiana sports, from high school to the professional ranks, made her an exceptional journalist. “

McCord is the second journalist working in the New Orleans area to die in a plane crash this year. On August 16, WVUE news anchor Nancy Parker was doing a story in New Orleans about stunt pilot Franklin Augustus when the two crashed. Both Parker and Augustus died.

Lafayette is the fourth-largest city in Louisiana with a population of about 130,000, according to the 2018 census. It is located about 217 kilometres west of New Orleans.